MARKET TREND FOR WEDNESDAY, MAY 11, 2016
The otherwise stable Markets will react to the amendments in the Mauritian treaty which affects the GAAR and this will see the Markets opening on a gap down note. The Markets will see itself opening well below its 200-DMA opening with the expected opening levels and this will send the Markets once gain in a consolidation phase. It is very important to note at this point that this reaction of the Markets is likely to be knee-jerk affair in the immediate short term and the Markets are likely to be bought into with any dip. 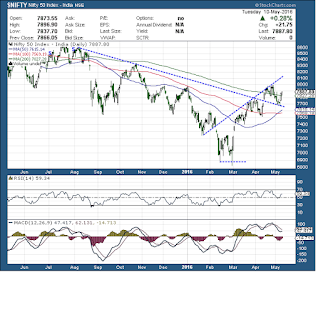 The RSI—Relative Strength Index on the Daily Chart is 59.34 and it remains neutral as it shows no bullish or bearish divergence. The Daily MACD stays bearish as it trades below its signal line. However, if the Markets remain ranged, it might report positive crossover in coming days.

On the derivative front, the NIFTY May futures have added over 2.64 lakh shares or 1.45% in open interest. The Markets have been adding open interest with every rise over last couple of days indicating addition in long positions.

Coming to pattern analysis, the Markets have inched above 200-DMA and yesterday after a modestly negative opening took support near its 200-DMA to move up again. The logical zone of resistance for the Markets would be 7970-7990 range and a fresh rally would occur only after the Markets move past these levels. Having said this, the Markets will react to the amendments in the Mauritian treaty and this will have its knee-jerk reaction in the immediate short term. However, it becomes important to note that though the Markets will are all likely to see themselves opening below the 200-DMA level which is 7827 today, there will be no structural breach on the Daily Charts. There are also bright chances that any price shock will be bought into and such gap downs are all likely to be utilized as buying opportunities.

All and all, gap down opening expected following developments on the Mauritian treaty front but the price shocks are likely to be utilized as sudden buying opportunities given the overall fundamentals of the Indian Markets. It is best advised to refrain from creating aggressive shorts and in fact make very selective and moderate purchases with every downside that is witnessed. Liquidity should be maintained while continuing to maintain a overall cautious outlook on the Markets.