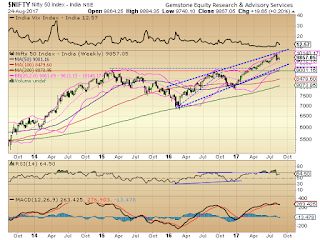 In our previous Weekly Note, we had categorically mentioned that the NIFTY will head nowhere. It will neither see any breakdown nor will it see any runaway up move. Keeping in line with this analysis, the benchmark NIFTY50 headed nowhere but consolidated in a much capped range. NIFTY ended the week with net gains of 19.65 points or 0.20%. We keep our analysis on similar lines for coming week as well. We do not see NIFTY making a major up move given the divergent signals of the Daily and Weekly Charts. We will see the Markets resisting at higher levels and on similar lines, we do not see any major breakdown on Charts as well.

The Relative Strength Index – RSI on the Weekly Charts is 64.5047 and it remains neutral showing no divergences against the price. The Weekly MACD stays bearish as it trades below its signal line. On the Candles, a Long Lower Shadow has occurred. Such signals are usually bullish if they occur near support levels or when a security is oversold. However, in the present circumstance it holds very little significance.

The pattern analysis show the Markets trading well within the 18-month upward rising channel as evident on the Charts. Even if the NIFTY show some more retracement but stays within this Channel, it would be continuation of a perfectly healthy correction.

Overall, we do not see the Markets making any major headway on the upside during the coming week. In the same breadth, we do not see any major downsides as well. Markets will attempt to take cues from Jackson Hole symposium and is likely to remain volatile. Distinctly weak set up on US Treasuries and 10-YR US Bond Yields is likely to act in overall favor of Emerging Markets. Further, Indian Markets have underperformed its Asian Markets in previous 3 sessions. This will overall keep downsides limited and keep the NIFTY in a defined broad trading range over coming week. 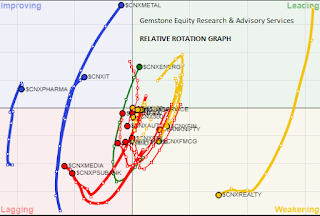 A study of Relative Rotation Graphs – RRG show that METAL stocks are distinctly gaining momentum and will continue to remain strong in the coming week. ENERGY Stocks along with METAL and IT are likely to continue to relatively outperform the NIFTY. Broader Indices like CNX100 and NIFTYJR (NIFTY Next 50) are also seen gaining momentum and stock specific performance will be seen in these two Indices as well. MEDIA, FMCG, CNXMID,  REALTY along with PHARMA are likely to lose momentum on Weekly basis. AUTO is likely to continue to under-perform.

MARKET OUTLOOK FOR THURSDAY, AUG 24, 2017
The Markets saw a sharp up move on Wednesday mainly led by short covering and this saw the benchmark NIFTY50 ending the session with net gains of 86.95 points or 0.89%. With this, for the second time in this month, the level of 50-DMA and its filter which also happens to be the previous immediate low of 9685 stands validated and remains a sacrosanct support for the Markets in the immediate short term. We expect a quiet start to the session on Thursday and will see volatility to persist as we have a short week with Friday being a trading holiday.

The Relative Strength Index – RSI on the Daily Chart is 49.1959 and it remains neutral not showing any bullish or bearish divergence. The Daily MACD still continues to remain bearish while trading below its signal line but it has started to narrow its trajectory. No significant formations are seen on Candles.

The pattern analysis shows that the levels of 50-DMA has once again provided support to the Markets and the Markets have closed up comfortably above it. In event of any consolidation continuing, this 50-DMA level is expected to continue to act as support followed by its immediate previous low of 9685. 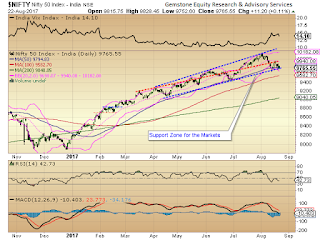 The benchmark NIFTY50 failed to capitalize on a buoyant opening that it got in Tuesday’s trade and ended the day after oscillating in a capped range with minor gain of 11.20 points or 0.11%. The NIFTY has ended the day a notch below its 50-DMA but remains within its filter and trades above critically important pattern support. We expect a modestly positive start to the Markets on Wednesday. However, the overall reading remains very much on similar lines and the 50-DMA and the levels of 9685 will remain critically important levels to that the NIFTY will have to guard.

The Relative Strength Index --  RSI on the Daily Chart is 42.7262 and it remains neutral showing no divergences of any kind against the price. Daily MACD stays bearish while trading below its signal line. No significant formation was observed on Candles.

The pattern analysis shows that the Markets are desperately hanging on to the lower support line of the multi-month channel that it has been trading in. The previous immediate low of 9685 also happens to be the filter levels of 50-DMA and therefore this pattern support along with these levels will have to be critically observed.

All and all, it is of paramount importance that NIFTY crawls back above its 50-DMA level once again. If it crawls back above 50-DMA, then even if the Markets continue to consolidate, the weakness can be averted. However, more the NIFTY persists below 50-DMA, greater will be the probability that it will tests its filter and previous support point of 9685. We continue to recommend extremely cautious and stock specific view on the Markets for today. 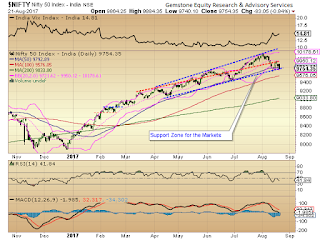 The Indian Equity Markets had much worse-than-expected day on Monday as the benchmark NIFTYT50 came under intense pressure in the second half of the session and ended the day with net loss of 83.05 points or 0.84%. Tuesday’s session will remain an acid test for the Markets. The NIFTY has slipped below its 50-DMA which stands at 9792 but still remains within its filter. The immediate previous low of the Markets i.e. 9685 will remain extremely crucial levels to watch for. It would be desperately important for the Markets to trade above 9685 levels failing which we will see more weakness creeping in. A flat opening is expected on Tuesday and fresh shorts that are seen are likely to lend support at lower levels.

The Relative Strength Index – RSI on the Daily Chart is 41.8403 and it remains neutral showing no divergence on either side against the price. The Daily MACD continues to remain bearish while trading below its signal line. No significant formations were observed on Candles.

The Pattern Analysis reveals that the NIFTY currently stands at much precarious levels. It has closed at the lower support line of the upward rising channel that it has been trading in. It would be critically important for the Markets to hang on above this line or at least above 9685 level to avoid weakness from creeping in.

There are chances that we might see some weakness in the initial trade. There are fresh shorts that are seen being built up but they may not lend support immediately. Shorts might come into play at lower levels. We recommend to strictly avoid any major exposure until the Markets show any definite directional bias. It is advised to continue to remain extremely stock specific and adopt highly cautious outlook for the day. 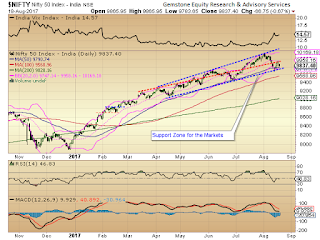 Technically weak global environment along with the Infosys saga weighed heavy on the Markets as the NIFTY ended the day with net loss of 66.75 points or 0.67%. Though the Markets ended with net loss, it did recover nearly half of its intraday losses from the low point of the day. The opening on Monday morning is likely to remain subdued. In this short 4-day working week, the 50-DMA levels which stand at 9790 will remain extremely important to watch out for. These levels will have to be guarded at Close levels otherwise we may see some temporary weakness creeping in once again in the Markets.

The Relative Strength Index – RSI on the Daily Chart is 46.83 and it remains neutral showing no divergences against the price. The Daily MACD stays bearish while trading below its signal line.

The Pattern Analysis shows the NIFTY trading in a broad upward rising Channel as of today. The lower end of the channel coincides with 50-DMA which remains in the close vicinity. These levels along with its filter will remain critical for the Markets.

Overall, we do not expect the Monday’s session to see any runaway up move in any case. The up moves will encounter resistance near the 20-DMA of the Markets which as of today remain a short-term resistance. However, we do not rule out the Markets consolidating in a defined range. Volatility will continue to persist and we will see it remaining ingrained in the session. We recommend keeping activities to extremely stock specific level and avoid any major directional exposures. Cautious outlook advised for the day.