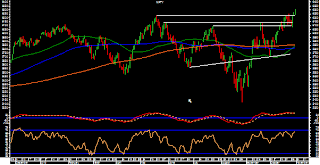 As evident from the Daily Charts, the Markets have attempted a upward breakout after consolidating near its key resistance zone of 6230-6250 levels. Today, we can expect a flat to mildly negative opening  but the Markets would continue to trade with positive bias so long as it maintains the levels above of 6250.

The RSI—Relative  Strength Index on the Daily Charts is 68.6825 and it has reached its highest value in last 14-days which is bullish. It does not show any bullish or bearish divergence as such. The Daily MACD continues to remain bullish as it trades above its signal line.

On the derivative front, the NIFTY November futures have added over 41.77 lakh shares or 22.16% in Open Interest. This clearly indicates that there was addition in long positions and the spurt that we saw was not on account of short covering.

All and all, the Markets are likely to see the upward momentum continuing so long as they are maintaining levels above of 6250. Even at higher levels, if the Markets consolidates , the technicals suggest that they would do so with positive bias with secotoral out performance continuing. While shorts should be strictly avoided, any upward momentum should be used to protect profits and any consolidation should be used to make selective purchases. Positive bias is advised for the Markets today. 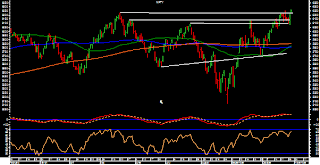 MARKET TREND FOR TODAY
Today’s session would be very critical for the Markets as today is the expiry day of the current derivative series. The Markets have closed precisely at the resistance levels of 6250 and it is expected to open on a flat to mildly negative note. If it opens modestly negative, its behaviour vis-à-vis the levels of 6250 would be extremely important and critical.

The lead indicators continue to show weariness on the Daily Charts. The RSI—Relative Strength Index on the Daily Chart is 66.3873 and it does not show any failure swings. But the NIFTY has set a new 14-day high but RSI has not and therefore, the Bearish Divergence continues to Daily Charts. The Daily MACD has reported a positive crossover and it now trades above its signal line.

On the derivative front, total NIFY Open Interest has continued to show nominal reduction. This signifies no major unwinding of long positions is seen and at the same time, no major longs has been added as well. Rollovers have remained average in line with the previous month.

The reading of pattern analysis on the Daily Charts very clearly suggest the Markets consolidating in the resistance zone of 6230-6250 levels. If we make a plain reading, it has so far not been able to breach those levels comprehensively until now. Further if we read the lead indicators along with this, it shows some tiredness in the indicators and this suggests that there is more time before the Markets breaches these levels on the upside.

All and all, there is no breach of the resistance zone of 6230-6250 on the upside with conviction. Until this happens, high degree of caution is advised in the Markets. Though any downside may be utilized for making fresh purchases, this should be done on extremely careful and selective basis while protecting profits at higher levels. Some amount of volatility would continue to stay. Cautious optimism is advised for today. 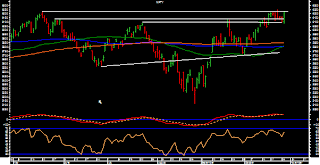 As evident from the charts, the Markets have once again tested the resistance zone of 6230-6250 levels. Today’s session remains very critically important as Markets are expected to open on a modestly positive note and attempt a breakout. In this case, the intraday trajectory that the Markets form would be extremely critical to see if the Markets are able to move past the critical resistance zone of 6230-6250 and sustain above that.

The lead indicators show little tiredness in the Markets. The RSI—Relative Strength Index on the Daily Chart is 64.8339 and it does not show any failure swings. However, the NIFTY has set a new 14-day high, but RSI has not and this is Bearish Divergence. The Daily MACD too has continued with its negative crossover and is currently bearish as it trades below its signal line.

On the derivative front, total Open Interest in NIFTY futures have shown a decline. This signifies that there has been short covering as well in the Markets. DIIs have remained net sellers to the tune of over Rs. 854 crores yesterday.

Going by the pattern analysis and reading leading indicators along with this, there are chances that the Markets may not give a clear breakout today. Even if it opens higher on the positive side, the intraday trajectory would be critically important and there are chances that we might again see some profit taking creeping in at higher levels.

All and all, it is critically important for the Markets to move past the major resistance zone of 6230-6250 levels comprehensively and sustain above that. Until this happens, the Markets would constantly remain under risk of witnessing correction from higher levels. It is advised to keep making selective purchases but also equally vigilantly keep protecting profits at higher levels. Over exposure is not advised in current Markets. Positively cautious approach is advised for today.

Caution reigned yesterday ahead of RBI Credit Policy Announcement today as the Markets remained in corrective mode and ended the day with net loss of 43.80 points or 0.71%.

Today, expect the Markets to open on a flat note and look for directions. Today, until the RBI comes up with announcements, the session is likely to remain quite range bound and shall give reactions after that.

The RSI--Relative Strength Index on the Daily Chart is 57.7877 and it is neutral as it shows no bullish or bearish divergence or any kind of failure swings. The Daily MACD has turned bearish as it now trades below its signal line as it has reported a negative crossover.

The Markets remain poised at a very critical juncture. Today, the session would also remain dominated with rollover centric activities. Along with that, the Markets have made 6230-6250 levels its immediate top and have formed themselves in a way that they can trade in a very broad trading range. However, given today's RBI Policy, the Markets have discounted a rate hike of up to 25bps. Anything above this would have the Markets react very negatively to that. On the other hands, if the rates remain unchanged, which is not much likely, it would be a positive surprise for the Markets with any rate cut being absolutely not expected.

Overall, amidst such scenario, we continue to advise to remain moderate to light on the positions and avoid any agressive positions on either side.Shorts are not advised as there is no structural breach on the Charts. Downsides, if any, should be effectively utilized to make fresh purchases. Positive caution is advised for today. 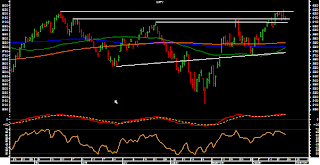 The RSI—Relative Strength Index on the Daily Chart is 62.0055 and it is neutral as it does now show any kind of failure swings or any kind of bullish or bearish divergences. The Daily MACD continues to trade above its signal line.

On the Weekly Charts, the Weekly RSI is neutral at 59.89.25 as it shows no failure swings or any divergences. The Weekly MACD too continues to trade above its signal line.

On the Derivative front, NIFTY October futures have shed over 11.14 lakh shares or 6.47% in Open Interest. Even the total cumulative Open Interest have shown a reduction which shows that profit taking at higher levels and unwinding of long positions is seen.

Given these reading and going by the pattern analysis as well, it is clear that the levels of 6230-6250 have been an immediate top for the Markets as of now. Fresh sustainable up move shall occur only after the Markets move past these levels. Until this happens, it is likely to remain in broad trading range. As mentioned above here, the Markets would also give some volatile reactions to the RBI Credit Policy slated for tomorrow.

Overall, the broad analysis remains more or less similar as the Markets continues to remain in broad consolidation stage. Coupled with this, we also enter the expiry week and the session would remain dominated with rollover activities. Shorts, under such circumstances should be avoided. Sectoral out performance would continue and therefore, selective purchases should be made. Overall, positive caution is advised for today.