Due to a technical glitch, today's edition of Daily Market Trend Guide has not been published. Inconvenience caused is sincerely regretted. 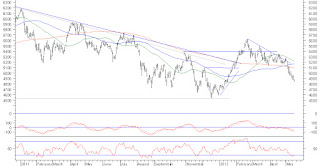 The Markets stands OVERSOLD again, and thus, we can see some respite coming in from the weakness that we saw yesterday. The Markets are expected to open on a modestly positive note and look for directions and the intraday trajectory would continue to remain important and resistance would be seen on the downside.

The lead indicators continue to remain OVERSOLD. The RSI—Relative Strength Index on the Daily Chart is 27.8096 and is in OVERSOLD range and also has reached its lowest value in last 14-days. IT does not show any negative divergence. The Daily MACD continues to remain below its signal line.

The Markets have seen external pressure being exerted on it and during such time, it tends to defy the technicals. The NIFTY has lost over 175 points while being OVERSOLD vindicates this point. However, in such case, it is best advised to sit through this, without attempting to average and maintain adequate liquidity.

Today also, we can expect some respite from the weakness that we have been seeing in last couple of sessions. However, at the same point, it is still advised to remain light on positions and avoid any heavy positions on either side, and shorts should  be specifically avoided.

All and all, even with some respite, aggressive positions should be avoided. This is because, we may see a pullback, but what we need is a reversal. There is a difference between pullback and reversal. Thus, highly stock specific and selective approach should be avoided and only selective purchases may be made avoiding aggressive positions and protecting profits. Shorts should be strictly avoided. Overall, a cautious optimism is advised for today.

MARKET TREND FOR TODAY                                                            May 16, 2012
The Markets snapped its 5-day losing streak as it opened moderately low, improved as the session went ahead and finally ended the day with modest gains, quite on expected lines. The Markets opened on a moderately negative note  and traded in a capped range in the morning trade. It however, came into the positive territory and while remaining in upward rising trajectory, went on to give the day’s high of 4955.20 in the afternoon session. The Markets came off a bit from those levels but recovered again to finally end the day near the high point of the day at 4942.80, posting a net gain of 35 points or 0.71%. The volumes remained on the lower side and the Markets have formed a almost parallel bar with slightly lower top and bottom on the Daily High Low Charts. 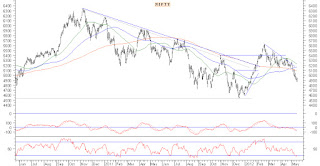 Technically speaking, since the Markets have ended the day near the high point of the day, they should, under normal circumstances, continue with their up move. However, this shall not happen following global cues and we are again likely to see a weaker opening. However, we are not expected to see lows below the opening levels as the Markets would again get OVERSOLD and the technicals would resist the downside.
For today, the levels of 4970 and 5025 are immediate resistance levels and the levels of 4905 and 4860 are immediate supports on the Charts.

The RSI—Relative Strength Index on the Daily Chart is 32.3078 and it has just moved above its Oversold area, which is Bullish. It does not show any negative divergence or failure swings and it is therefore neutral. The Daily MACD continues to trade below its signal line.

Having said this, it is important to note that had there been no negative global cues, the Markets were expected to continue with their imminent pullback. However, the weak global cues would cause a lower opening but, again, the technicals are likely to resist to any further weakness post opening. There are bright chances that the Markets open lower and after hovering around the low levels of the day, improves as we go ahead in the session because any lower opening would make the Markets OVERSOLD again.

All and all, the analysis remains the same as the Markets would get OVERSOLD again after the weaker again. The volatility would refuse to go away so retail investors should remain light on their positions and protect profits vigilantly. Shorts should strictly be avoided. Overall, cautious outlook is advised for today. 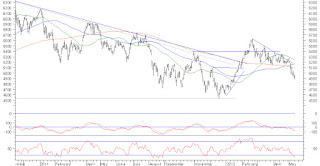 Today’s analysis would be more or less similar as the Markets can open moderately lower and improve as the session progresses and we may see the OVERSOLD technicals of the Markets resisting any major downside.

All and all, we reiterate our advice to retail investors to stay away from any heavy positions on either side and specifically avoid fresh shorts. Profits may be protected and selective purchases may be made. Overall, positive caution is advised for the day. 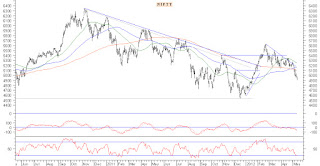 The Markets are finally OVERSOLD. Today, expect the Markets to open flat and are expected to remain directionless in the initial session and have all technical chances to improve as the session goes ahead. The intraday trajectory would continue to remain important.

NIFTY and Stock Futures both have gone ahead in adding Open Interest and the NIFTY PCR stands at 0.81, which too is nearing Oversold levels.

Having said this, from the above reading, we can fairly conclude that the Markets on Daily Charts are absolutely OVERSOLD and some respite from the current weakness can be seen, at least in the initial week. Even if we presume that the Markets may touch the levels of 4810 mentioned above, it should not happen before a pullback is seen on the Daily Charts in the initial week.

All and all, the Markets are loaded with shorts positions, are Oversold and thus, there are fair chances set for a short  covering and bias towards up move. There are chances that we open flat and improve as the session goes ahead. However, volatility is definitely to remain. Any sharp up move should be used in protecting profits on existing positions and the retail investors are  continued to be advised to remain light on the positions and refrain from shorts by any means. Overall, a cautiously positive outlook is advised for today.