MARKET OUTLOOK FOR THURSDAY, OCT 19, 2017
Some minor corrective cracks began to appear in Wednesday’s trade as the benchmark NIFTY50 ended the day with a modest loss of 23.60 points or 0.23%. Though the Index did recover from the lows of the day but some amount of long unwinding remained evident in the session. Wednesday was practically the last trading day of the Week as Thursday will have a 1-hour Muhurat Session only and Friday remains a trading holiday.

Going into trade on Thursday, it would be too theoretical to analyze the Markets thoroughly as such Muhurat Sessions are typically range bound sessions. In such sessions, the Markets usually head nowhere. It oscillates in a given capped range with no major headway on either side.

The levels of 10250 will continue to act as immediate resistance for the Markets with supports coming in at 10180 and 10160 zones.

Going by the pattern analysis, the NIFTY has currently suffered a minor throwback and has returned to the levels from where it has attempted to breakout. However, given the overall reading of lead indicators, there are greater chances that the Markets return to the broad trading range that it has been trading in over past couple of days.

Overall, though we may expect a quiet and range bound trade on Thursday, beginning Monday, we can expect the corrective undertone to persist. The levels of 10250 will continue to act as immediate resistance and no sustainable up move shall occur until the NIFTY moves past this level. We expect the stock specific sectoral out performance to continue on Thursday. We recommend attempting to make select value purchases while continuing to protect profit with each up move.

MARKET OUTLOOK FOR WEDNESDAY, OCT 18, 2017
Post attempting breakout in the previous session, the Markets deliberated on Tuesday as the benchmark NIFTY50 headed nowhere and oscillated in the narrow 25-point range all throughout the session. It ended the day with minor gains of 3.60 points or 0.04%. As mentioned in our previous note, the levels of 10250 played out as resistance area for the Markets. Wednesday is likely to see a quiet opening but as mentioned often in our previous note, the current structure of the Markets warrants extreme caution as we deal with the marginal highs that the NIFTY is giving each day. 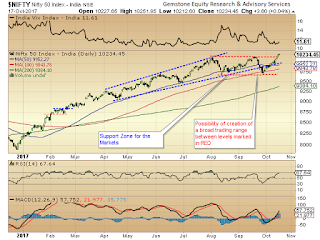 The Relative Strength Index – RSI on the Daily Chart is 67.8221 and it has market a fresh 14-period high once again which is bullish. The Daily MACD stays bullish while trading above its signal line.

The pattern analysis of the Markets shows very tentative mood and caution at higher levels. In normal circumstance, after a attempted breakout from the broad trading range, NIFTY should have continued with the up move on Tuesday. But instead it deliberated and headed nowhere and showed signs of consolidation at higher levels.

While taking a pure technical view on the Markets, the Markets currently appear highly cautious. The high level of caution and even higher hedged activities are evident from the NIFTY PCR (Put to Call Ratio) which currently remains at multi-year high near 1.70. In view of this, despite buoyant under-current, we would still should a word of caution and would point out at the Markets continue to remain vulnerable to profit taking at higher levels before it achieves a clean break out. We would recommend keeping exposures at modest levels and continue to utilize up moves in protecting profits.

MARKET OUTLOOK FOR TUESDAY, OCT 17, 2017
Monday’s trading session saw yet another day of surge in NIFTY as the benchmark Index marked yet another life time high while ending the day with gains of 63.40 points or 0.62%. With Monday’s close, the NIFTY has attempted to give a fresh breakout from a rectangle trading range that it has formed over past couple of weeks. In all probability, we may see Markets opening positive and continuing with its up move on Tuesday. However, at the same time, the lead indicators have continued to suggest the heightened levels of caution with which we need to approach the Markets. 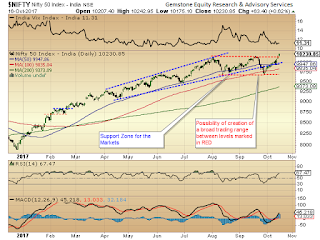 The Relative Strength Index – RSI on the Daily Chart is 67.4723 and it has reached its highest value in last 14-days which is bullish. It does not show any divergence against the price. The Daily MACD remains bullish as it trades above its signal line. No significant formations were observed on Candles.

The pattern analysis suggest that the Index is attempting to break out on the upside from the broad rectangle formation trading range that it has formed over past couple of days. However, this will need confirmation on the next trading day.

If we take a broader look at the current structure of the Markets, we cannot dispute the fact that the undercurrent is extremely buoyant and the NIFTY has attempted to give a breakout from a broad trading range that it has been trading in since last couple of weeks. However, at the same time, we cannot also ignore the fact that the lead indicators on the Daily and Weekly Charts are showing divergent signals. Also, VIX remains at its lowest in recent times couple with very high NIFTY PCR (Put to Call Ratio). Taking into account all of these factors, we recommend exercising very high degree of caution and utilize all up moves for protection of profits while keeping fresh purchases at very modest levels. Highly cautious outlook is advised for the day.

MARKET OUTLOOK FOR MONDAY, OCT 16, 2017
Indian Equities continued to enjoy yet another buoyant session on Friday as the benchmark NIFTY50 marked yet another lifetime high at 10191.90 and ended the day with net gains of 71.05 points or 0.70%. Monday and coming days remain critical for the Markets as the undercurrent remains buoyant but at the same time, the behavior of the Markets vis-à-vis the levels of 10200 will be critical to watch out for. Despite buoyant undercurrent, NIFTY has yet to show a clear and convincing breakout from the broad rectangle trading pattern that is formed.

The Relative Strength Index – RSI on the Daily Chart is 64.4602 and it has marked a fresh 14-period high which is bullish. RSI does not show any divergence against the price. The Daily MACD stays bullish while trading above its signal line. A rising window occurred on Candles. This is essentially a gap which usually implies continuation of up move. However, given the overbought nature of certain lead indicators, this will require confirmation on the next trading day.

While having a look at pattern analysis, NIFTY has tested the upper trend line of the rectangle trading range that has evolved over last couple of weeks. In a way, we can say that it has encountered a Triple Top resistance area and it is now attempting to move past it for a breakout.

As mentioned earlier, despite buoyant set up, we still continue to approach the Markets with extreme dose of caution. It may continue to scale marginal highs driven by massive liquidity and sentimental push but it may so happen that a sustainable and convincing breakout may still continue to remain elusive. The factors like very high (above 1.50) levels of PCR (Nifty Put to Call Ratio), bearish divergences on the Weekly Charts, fatigue in some of the lead indicators still forces us to approach the Markets with extreme cautions. Momentum may be chased but with very high degree of alertness at higher levels.