MARKET TREND FOR FRIDAY, SEPTEMBER 16, 2016
While trading perfectly on analyzed lines, the domestic equity markets traded in a narrow range and consolidated for the second day in a row while keep its head successfully above the critical 8700-mark as it ended the day yesterday with minor gains. Today as well, while once again keeping the analysis on similar lines, we would like to add some positive bias to that as well. Today, we can fairly expect the Markets to remain stable and trade positive and some chance to resume its up move. However, the levels of 8700 would continue to remain an extremely critical level to watch out for. 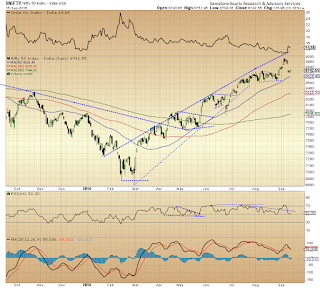 The RSI—Relative Strength Index on the Daily Chart is 52.3049 and it remains neutral while showing no bullish or bearish divergence or any failure swing. The Daily MACD stays negative while trading below its signal line. On the Candles, two potentially bullish / reversal causing formations have been observed. Yesterday’s candle is a  Doji” (wherein the real body gaps above or below the previous candle) and this candle also has a long lower shadow.
Now, if this happens near a support or if it appears after a decline, it can mark a potentially bullish reversal. However, both of these require confirmation on the following day.

On the derivative front, the NIFTY September futures has shed over 5.77 lakh shares or 1.77% in Open Interest. Since shows some more amount of short covering from lower levels in the Markets.

Having a close look at the Pattern Analysis, it is much visible that the after seeing 100% retracement after breakout out from the 8700-8730 levels on the upside, these levels have successfully acted as support for the Markets on its way down. The reading remains clear that so long as the Markets remain and trade above 8700-levels, no major downsides will be witnessed. However, any breach below 8700-mark will see some pain in the immediate short term.

All and all, the reading on the technical charts, the F&O data and the lead indicators clearly suggest a positive bias for the Markets. There are increased chances that today we may see some attempt to move on the higher side. Though bulk of the global outlook will remain range bound due to pending US Interest Rates outcome on September 21, it is widely expected that the rates would remain unchanged and Emerging Markets in general and India in particular will stand to favorable react to this. Overall, while refraining from shorts, selective buying can be done with any range bound movement. Cautiously positive outlook advised for today.

MARKET TREND FOR THURSDAY, SEPTEMBER 15, 2016
Indian Equity Markets traded more or less on expected lines as it managed to keep its head above the critical 8700-mark for the most part of the day before ending with modest gains. Today’s session is likely to be crucial once again and therefore, the analysis for today would remain on similar lines. The levels of 8700-8730 would be crucial to watch out for and it would be critically important for the Markets to trade above 8700-mark to avoid any weakness from setting in. 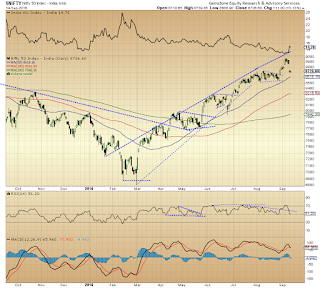 The RSI—Relative Strength Index on the Daily Chart is 51.1954 and it remains neutral as it shows no bullish or bearish divergence or any failure swings. The Daily MACD continue to remain bearish as it trades blow its signal line.

On the derivative front, the NIFTY September futures have shed over 1.82 lakh shares or 0.56% in Open Interest indicating minor short covering from lower levels.

The Pattern Analysis on the Daily Chart point towards some stability returning to the Markets. After achieving 100% retracement / throwback from the breakout levels of 8700-8728 zone, the Markets have been attempting to find immediate support at these levels. Further, the lead indicators too rest at pattern support and so do the Markets. The F&O data shows minor short covering from lower levels point discomfort of market participants below 8700 levels.  The F&O data, coupled with technical indicator suggest possibility of Markets taking support at the critical 8700-mark. In any case, the Markets will have to see themselves trading above these critical levels to avoid any more weakness from setting in.

IT Sector relatively under-performed yesterday but continued to see some accumulation at lower levels. This will continue and we might see it picking up in coming days. Apart from this, selective stocks from basket of NIFTY JR, Banks and select quality MidCaps will continue to outperform today as well. There is no structural breach on the Charts as the Markets continue to trade above all of its DMAs. Overall, cautious optimism is advised for the day.

MARKET TREND FOR WEDNESDAY, SEPTEMBER 14, 2016
After suffering a gap down opening on Monday, the equity markets showed no signs of recovery and finally ended the day with a loss of 151.10 points. With the Monday’s session, the Markets have received a 100% throwback / retracement from the of 8700-8730 levels from where it had achieved a breakout on the upside. After losing 237 points in two sessions, we can expect the Markets to attempt and stabilize today. Though intraday trajectory would be critically important to watch out for, the behavior vis-à-vis the levels of 8700-8730 zone would be crucial to watch out for. 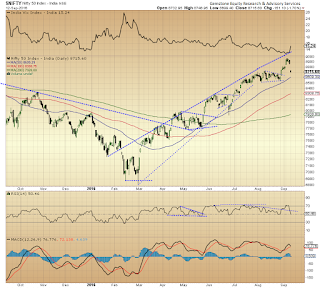 The RSI—Relative Strength Index on the Daily Chart is 50.4574 and it remains neutral as it shows no bullish or bearish divergence or any failure swings. Though the Daily MACD still remains bullish while trading above its signal line, it has reported a Bearish Divergence. A Falling Window, i.e. a gap created on the Candles may see the Markets struggling somewhat more at current levels. However, this needs confirmation on the following day.

On the derivative front, the NIFTY September futures have shed over 6.28 lakh shares or 1.88% in Open Interest clearly indicating offloading / unwinding of long positions.

Pattern analysis on the Daily Charts makes it evident that the Markets have seen 100% retracement / throwback back to 8700-8730 zone after breaking out on the upside couple of days back. This usually implies that we may see some stability returning to the equity markets but in the same breath, the levels of 8730-8700 would be critical to watch out for. Any breach below this level will see some more weakness creeping in.

All and all, though we cannot expect a outright pullback, we can certainly hope for some stability to return and for this, it would be important to see the NIFTY not breaching the 8700-mark. Some of the sector indices like CNXIT has shown potential bottom formation while forming a engulfing bullish candle and therefore we may continue to see outperformance in such stocks. Pharma and other select stocks may also see some outperformance. Overall, cautious outlook ahead for the Markets today.

MARKET TREND FOR MONDAY, SEPTEMBER 12, 2016
Given some contradictory technical signals on the Daily and Weekly Charts, we had mentioned in our Friday’s edition that some corrective intermittent selling bouts cannot be ruled out. Keeping in line with this analysis, the equity markets on Friday saw some corrective selling pressure while it ended with loss of 0.96%. Today, we will see such corrective activity continuing and the session is likely to remain in a  given range with some corrective bias. We can expect to see the Markets opening on a mildly negative note and some amount of consolidation is likely to continue. The intraday trajectory that the Markets form will be critical to watch out for. 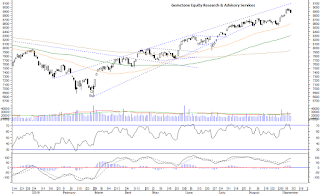 The RSI—Relative Strength Index on the Daily Chart is 62.5151 and it has once again moved below from a topping formation which is bearish. Beyond this, it remains neutral without showing any bullish or bearish divergence or any failure swings. The Daily MACD stays bullish as it continues to trade above its signal line. On the Weekly Charts, the Weekly RSI is 70.5763 and it has reached its highest value in last 14-periods which is bullish. Though it does not show any bullish or bearish divergence, it remains in “overbought” territory on Weekly basis.  Weekly MACD remains bullish trading above its signal line. On the Weekly Charts, a Shooting Star on the Candles occurred which has capacity to form a potential top for the Markets in the immediate short term.

On the derivative front, the NIFTY September futures have shed over 9.12 lakh shares or 2.66% in Open Interest clearly indicating offloading of long positions.

Pattern analysis of the Markets clearly point towards some correction continuing in the Markets. On the Daily  Charts, though we saw some corrective activities on the Friday, the Weekly Chart the lead indicators are overbought and the Candles show potential formation of a top for the immediate short term. All these indicate that the levels of 8968 have now become an immediate top for the Markets and any fresh up move shall occur only after this level is breached on the upside.

All and all, though we may see some mildly negative opening and some technical pullback as well later in the day, the overall state of the Markets will remain that of consolidation with the levels of 8775 and 8730 acting as very crucial supports. IT pack will continue to see some accumulation on the lower side and some sectoral outperformance will continue as well. Overall, cautious outlook is advised for the day.