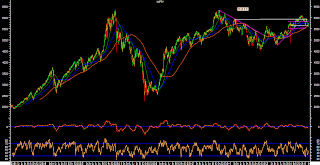 Today, we can expect the Markets to take some breather before it continues with its up move. Expect the Markets to open on a mildly negative note and look for directions. There are chances that after two day’s of up move the Markets consolidates again and some minor profit taking can be seen in the initial session. However, chances of improvement as we go ahead in the session cannot be ruled out.

The lead indicators are neutral to mildly bullish. The RSI—Relative Strength Index on the Daily Chart is 46.4343 and it is neutral as it shows no bullish or bearish divergence and also shows no failure swings. The Daily MACD is still bearish as it trades below its signal line but the it shows early likelihood of a positive crossover.

On the derivative front, the NIFTY April Futures have added over 10.89 lakh shares in Open Interest. This is very important indicator and it very clearly portrays that the rise that we saw in the second half of the session was not because of any short covering. This also further shows that there were fresh longs created in the system.

Having said this, it can be fairly concluded that the undercurrent remains buoyant even if we see some temporary consolidation or mild profit taking in the initial trade.

Overall, with the above reading, the analysis is very much clear that unless we see a technical breach on the charts, one should refrain from shorts and any momentary consolidation or minor profit taking should be utilized to make fresh purchases while continuing to guard and protect profits at higher levels. Overall, though cautious, but positive outlook is advised for today. 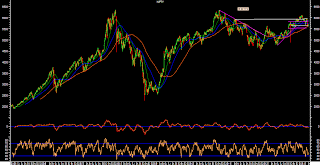 Today’s analysis would be more or less on similar lines like that of yesterday. The Markets are expected to open on flat note again today and trade in a capped range. Some consolidation would continue and therefore the intraday trajectory would continue to remain important. It would be important for the Markets to maintain levels above its 200 DMA as we mentioned yesterday to avoid any further weakness.

The lead indicators do not give any directional triggers. The RSI—Relative Strength Index on the Daily Chart is 41.4368 and it is neutral as it shows no bullish or bearish divergences. The Daily MACD has still continued to trade below its signal line.

On the derivative front, the NIFTY April Futures have added over 9.46 lakh shares or 8.48% in total Open Interest. This is a positive factor and the NIFTY PCR stands at 0.97 as against 0.98.

Having said this, the it can be concluded that the Markets still continues to trade without any directional triggers and therefore it is very much likely that such range bound directionless sessions may continue. However, so long as the Markets maintains the levels above its 200-DMA which is 5630 today, we will just have range bound consolidation and nothing more. Weakness shall creep in only if this levels are breached on the downside.

All and all, with the range bound movement likely to continue, it is advised to remain very stock specific while creating fresh positions. Shorts should be avoided as there is no technical breach on the charts as of now. While remaining selective with fresh positions, profits too should be protected at any levels. Overall, very light positions with cautious approach is advised for today.

MARKET TREND FOR TODAY                                                                April 01, 2013
The Markets had a very short and truncated week with two holidays in between but the expiry day saw the Markets ending with sharp gains  towards the end of the session after weak opening. The Markets opened on a negative note following weak clues and gave its intraday low of 5604.85 in the early minutes of the morning trade. Thereafter, after making this initial low, the Markets remained in rising intraday trajectory throughout the session. Markets kept gradually recovering until afternoon session and in the last hour of the trade saw a sharp spurt as it went on to give the intraday high of 5692.95 rising over 86-odd points from the day’s low. It hovered a bit around those levels and finally ended the day at 5682.55 posting a decent gain of 40.95 points or 0.73% making a higher top and similar bottom on the Daily High Low Charts. Today, expect a flat opening in the Markets. The Markets are expected to open weak and continue to look for directional triggers with the intraday trajectory remaining important. So far, the Markets have held on to its all important support levels of 200-DMA which is 5627.45 today and it would be important that the Markets do not breach these levels in case of some weakness or consolidation again.

For today, the levels of 5725 and 5740 shall act as immediate resistance on the Charts. The support come in at 5625 levels today.

On the derivative front, NIFTY has reported 57% rollovers and has added over 20 lakh shares in open interest. The NIFTY PCR is 0.98.

Having said this, there are no directional triggers for the Markets and it may continue to drift in either direction for few sessions. On the downside, as mentioned earlier, major and important support exists at 5627 in form of 200-DMA and it would be necessary that the Markets trades above these levels and do not breach these levels in case of some momentary weakness or some consolidation.

Overall, the Markets are likely to remain in a range with a mild upward bias. However, again, with no directional or technical triggers, it is equally likely that the Markets consolidates in a given range. In such case, it is advised to remain very selective and light on the positions and keep protecting profits wherever possible on either side. Overall neutral but cautious outlook is advised for today.