Today's analysis again continues to remain on similar lines. The Markets may witness a modestly negative opening and therefore moving past is 200-DMA would again continue to remain of paramount important.
At  Close levels, the Markets have held on to the levels of 200-DMA and it is expected that these levels would continue to hold at support at Close.
Volatility is expected to remain and the Markets are likely to continue to trade in a broad range. While maintaining liquidity, some selective purchases may be made. Overall, moderate exposures should be maintained.


Though the Markets ended the day on a flat note, it had a very volatile session during the day after opening on a much lower note. The markets saw weaker than expected opening and after such opening, formed intraday low of 8277.95 in the early minutes of the trade. The Markets saw recovery from the lows of the day in the morning trade itself and attempt to moved past the levels of 200-DMA. It moved in a sideways trajectory after recovering most part of its losses for the remaining part of the session but the Markets also saw some range bound volatile movements. It came off from its previous close but recovered again. It maintained the levels a notch above its 200-DMA and finally ended the day at 8334.60, posting a flat close with minor loss of 4.75 points or 0.06% while continuing to form a lower top and lower bottom on the Daily Bar Charts. 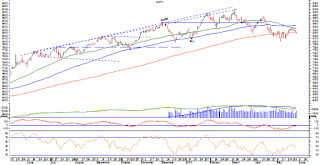 
Expect the Markets to open today on a flat to modestly positive note and trade in a caped range in the initial trade. The Markets have attempted to move past its 200-DMA levels yesterday after opening lower and today, it is very much likely to continue with this attempt and also attempt to regain some stability by trading modestly above 200-DMA. The behaviour of the Markets vis-à-vis the levels of 200-DMA will be crucial to watch out for.

Coming to pattern analysis, the Markets have been witnessing some short term consolidation with a bearish undertone after it attempted to pullback after forming recent lows. However, though it has so far managed to keep its head above 200-DMA after the pullback, the behaviour of the Markets vis-à-vis the levels of 200-DMA would be extremely important. It will have to keep its head above the 200-DMA levels if it has to attempt to continue with its reversal. Though the Markets have so far trade above this level, it will confirm the reversal only after it moves past its upper levels of broad trading range.

All and all, the Markets are still not completely out of the woods. The Markets are likely to pose a modestly positive opening but it will have to maintain levels above 200-DMA. Today being the expiry day, the rollovers would dominate the activity. Further, the other important triggers for the Markets would be the GDP data coming out tomorrow and the RBI Policy on June 3rd. With some amount of volatility likely overall cautious approach is advised for today. 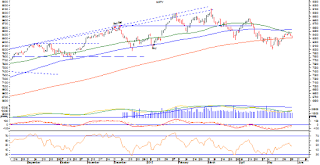 MARKET TREND FOR WEDNESDAY, MAY 27, 2015
Today, we enter into penultimate day of expiry of current series. Along with this, this also remains a crucially important day for the Markets that can impact its trend in the immediate short term. We are likely to see negative opening today and there are chances that the Markets sees itself opening below its 200-DMA. If this happens, it would be very critically important for the Markets to move past this level again. Until this happens, we would continue to see some bearish undertone in the Markets.

The RSI—Relative Strength Index on the Daily Chart is 48.5271 and it remains neutral as it shows no bullish or bearish divergence or any failure swings. The Daily MACD still continues to remain bullish as it trades above its signal line.

Coming back to pattern analysis, the Markets gave a technical pullback after posting its recent lows on May 7th. During this pullback, the Markets managed to move past its 200-DMA which it broke on the downside earlier. However, the Markets are not able to confirm this reversal as at least as of today, it has failed to post any higher bottom after recent lows. Today as well, the opening might see the Markets below 200-DMA and therefore, it would be of paramount importance for the Markets to move past this 200-DMA levels again. Until this happens we would continue to witness bearish undertone in the Markets.

All and all, non-technical factors such as currency weakness, weak earnings from key stocks, etc., will continue to weigh on the Markets as well. However, the Markets still are under the process of confirming its reversal and as of now, the bottom of May 7th holds valid and crucially important. Absence of delivery based buying in the Index components is also weighing in the Markets. Given this scenario, we would reiterate to remain extremely light on the exposure and maintain adequate liquidity until the directional bias is established. 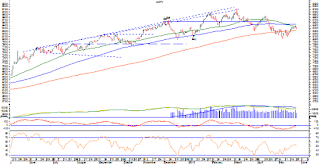 MARKET TREND FOR TUESDAY, MAY 26, 2015
After the Markets remaining in corrective mode yesterday, we can expect a quiet opening in the Markets today. The Markets are likely to open on a flat to mildly positive note and look for directions. They are likely to continue to remain in a broad trading range with the levels of 200-DMA acting as support and the levels of 50-DMA acting as resistance in the immediate short term.

Today, the levels of 8420 and 8465 will act as immediate resistance for the Markets. The supports come in at 8320 levels.

The RSI—Relative Strength Index on the Daily Chart is 50.1338 and it remains neutral as it does not show any bullish or bearish divergence or any failure swing. The Daily MACD remains bullish while trading above its signal line.

Going by pattern analysis, the Markets currently trade in a broad range with the levels of 200-DMA expected to act as support and the levels of 50 and 100-DMA posing resistance on the upside. However, given the expiry week, the Markets are likely to continue to remain in a broad trading range. Also, the Markets will have to see a conviction based up move with more amount of delivery buying taking place if it has to move past the upper levels of the trading range. Broadly speaking, the Markets have attempted to find a bottom after posting lows as on May 7th and has attempted a pullback since then. However, it needs to form a higher bottom anytime now and move past the remaining two DMAs in order to confirm the reversal. 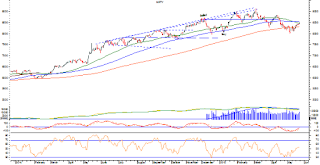 MARKET TREND FOR MONDAY, MAY 25, 2015
We can expect a muted start to the Markets today. The Markets may open on a very quiet note and might continue to trade in a given range while showing little negative bias. Though all cues remain positive some amount of minor weakness may be seen because of some stock specific pressure that we might see today. Today, we also enter into expiry week and therefore we can expect bulk of the activities being dominated with rollover centric actions.

The RSI—Relative Strength Index on the Daily Chart is 54.9866 and it has reached its highest value in last 14-days which is bullish. It does not show any bullish or bearish divergence. Daily MACD remains bullish as it trades above its signal line. On the Weekly Chart, Weekly RSI is 51.6538 and it remains neutral showing no bullish or bearish divergence or any failure swings. Weekly MACD continues to remain bearish as it trades below its signal line.

Looking at pattern analysis, the Markets have resisted to its 50-DMA at Close levels and this level is likely to continue to act as resistance in the immediate short term followed by the 100-DMA. On the Daily Chart, there is slight structural weakness as the 50-DMA has cut 100-DMA from above couple of sessions back and this may infuse some very short term weakness for the Markets. Having said this, in event of any weakness, the Markets may not show any significant downside but may continue to trade in a broad trading range with the levels of 200-DMA acting as major support. On the Weekly Charts, all DMAs remain positive and the Markets continue to trade above all of its DMAs.

All and all, keeping this in view, the Markets may not still completely be out of woods. It has continued to face shortage of delivery based buying. At the same time the lead indicators and other factors do not present any significantly negative cues as well. While remaining dominated with rollover centric activities in the coming days, it would continue to show some stock specific out performance. Overall, with no major downsides expected, ranged consolidation is likely to continue in the Markets.