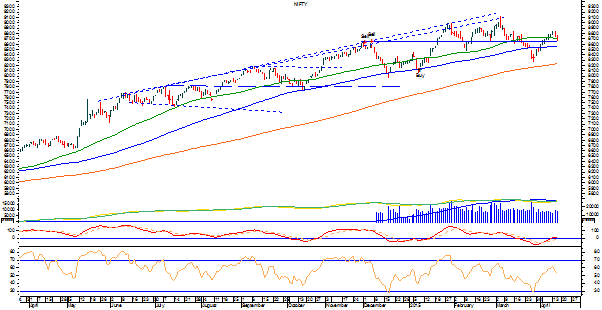 MARKET TREND FOR FRIDAY, APRIL 17, 2015
Today’s analysis remains more or less on similar lines. We can expect the Markets to open on a flat and quiet note and look for directions. Though we can expect a range bound trade in the morning, the behaviour of the Markets vis-à-vis the levels of 50-DMA which is 8708 today would be very crucial. It would be important for the Markets to maintain levels above this so as to avoid any further weakness from creeping in.

The RSI—Relative Strength Index on the Daily Chart is 52.3584 and it remains neutral as it shows no bullish or bearish divergence or any failure swing. The Daily MACD continues to remain bullish trading above its signal line.
On the derivative front, NIFTY April Futures have shed 52,600 shares or nominal 0.27% in Open Interest. This remains a negligible figure and it appears that significant amount of shorts still continue to exist in the system.


The Markets snapped its 7-day gaining streak as it saw a sharp but otherwise healthy correction in the last hour of the trade wherein it ended the day with losses. The Markets saw a quiet opening but it traded with modest losses all throughout the session. The range remained extremely narrow and capped and the Markets never really attempted any upside movement at all. It opened negative and traded with modest losses for the most part of the day. In the later part of the afternoon trade, it did attempt to move up wherein it went into green for a very brief time while forming the day’s high of 8844.80. Just when it seemed that it will consolidate, it saw a very sharp downside. It was more of a secular basket selling as the Markets lost ground very rapidly. It lost over 100-odd points from the high point of the day while forming the day’s low of 8722.40. It finally ended the day at 8750.20, posting a net loss of 83.80 points or 0.95% while forming a similar top but lower bottom on the Daily Bar Charts. 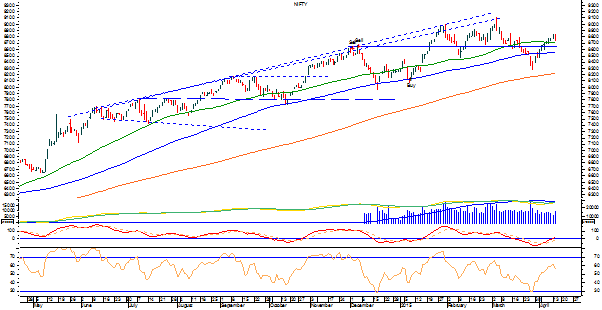 
Expect the Markets to open on a flat to modestly positive note and look for directions. The Markets snapped its 7-day gaining streak yesterday  but has closed above its 50-DMA and as of now this level has held out as support. Today as well, the levels of 50-DMA would be crucial to watch out for and the Markets are likely to hover around those levels. It would be important for the Markets to remain above this level or at least its filters to avoid any further weakness.

The RSI—Relative Strength Index on the Daily Chart is 55.4478 and it remains neutral as it shows no bullish or bearish divergences or failure swings. The Daily MACD continues to remain bullish as it trades above its signal line.

On the derivative front, NIFTY April futures have added over 6.30 lakh shares or 3.36% in Open Interest. This very clearly suggests addition of sizable quantity of short positions in the Markets. This is a crucially positive figure as the buying from lower levels as well as short covering may prevent the Markets from further weakness.

Coming to pattern analysis, post lows of 27th March, the Markets had gained over 400-points in seven straight sessions. The correction that we saw yesterday can prove to be healthy for the Markets. Even if the Markets consolidate in a range bound manner from these levels, it would be, in fact, healthy for the Markets in the immediate short term. The levels of 50-DMA would be important level to watch out for along with its filter as a important support at Close levels.

Overall, the Markets may see buying from lower levels. If not, then at least 50-DMA levels, it can also see some amount of short covering in the Markets. Given this scenario, it is advised to refrain from creating any short positions in the Markets. Purchases may be done but should be kept very limited while maintaining adequate liquidity in the Markets.

Due to technical glitch, we have not been able to publish Daily Market Trend Guide in regular PDF Format. Brief Market Forecast has been produced herewith. Inconvenience caused is sincerely regretted

Expect the Markets to see a quiet opening and continue to trade in a capped range in the initial trade with chances of some amount of consolidation at a later stage. The Markets have gained in last seven straight sessions and we cannot rule out consolidation at any levels now even if the overall trend remains bullish.

Overall the Markets have confirmed their pullback and the overall trend in the Markets remains absolutely intact and bullish. Selective purchases may be made as stock specific sectoral out performance will continue. While maintaining vigil on open positions, cautious optimism is advised for the day.
Milan Vaishnav,
Consulting Technical Analyst,
Af. Member: Market Technicians Association (MTA), USA
Af. Member: Association of Technical Market Analysts, INDIA

Expect the Markets to open on a flat note again and trade in a capped range in the initial trade. Though the Markets remain in an over all bullish bode and while the trend remains intact, some amount of consolidation in the immediate short term cannot be ruled out. The levels of 8795 and 8845 are likely to act as immediate resistance.

Overall, as mentioned, with some amount of ranged movement and consolidation expected to continue, some amount of volatility would remain ingrained in the Markets. While maintaining vigil on existing positions, very selective purchases may be made. Positive caution is advised for today.