Since the Markets have ended near the high point of the day, we can expect the Markets to give a positive opening in the initial trade. However, in order to capitalize on the gains the Markets will have to surge ahead with good participation, i.e. volumes. The absence of enough participation would be a tool enough to keep the Markets in the broad trading range. Therefore, intraday trajectory, along with volumes would be critical to decide the trend for the immediate short term.

The RSI—Relative Strength Index on the Daily Chart is 49.8354 and it is neutral as it shows no bullish or bearish divergence or failure swings. The Daily MACD still continues to remain bearish as it trades below its signal line.

On the derivative front, the NIFTY October futures have added nominal 96850 shares or 0.59% in Open Interest. The another way to interpret this figure would be to say that since there has been no reduction in Open Interest, the rise that was seen was not due to short covering and this increases the chances for the rise to percolate to the next day.

Examining the pattern on the Daily Charts, Markets are continuing to trade in broad 150+ points of trading range. On the lower side, the Markets have taken support at the 50-DMA levels and its filters and the trend support at 7815 levels. So long as Markets trades above these levels, broad consolidation would continue but some amount of volatility would continue to remain ingrained in the trade.

Overall, with Infosys coming out with numbers tomorrow, the IT pack would continue to witness volatile movement and Markets too, to some extent would react to this. Apart from this stock specific purchases and action would continue but as mentioned earlier volumes will have to be higher in order to have a sustainable and longer pullback. Overall, continuance of caution with very selective purchases is advised for the day.

The Markets tested its pattern support levels of 7818 while it made its low of 7815.75 but has closed above that. The Markets are likely to open on a modestly positive note and trade positive in the initial trade. Though intraday trajectory would remain grossly important to decide the trend for the session, it would be critically important for the Markets to maintain levels above of 7815-7818 mark.

The RSI—Relative Strength Index on the Daily Chart is 39.8405 and it has reached its lowest value in last 14-days which is bearish. It does not show any bullish or bearish divergence as such. The Daily MACD remains bearish as it trades below its signal line.

On the derivative front, the NIFTY October futures have added 50,500 shares or nominal 0.31% in Open Interest. This signifies that though the Markets remained range bound and volatile, there was no unwinding of open positions seen.

Returning to pattern analysis, as mentioned in our previous edition, the Markets continue to remain in a broad formation. They have closed below the 50-DMA but are still within in filters and also trade above its neckline support. It would be critically important for the Markets to remain and trade above 7815-7818 levels. Any breach below these levels would induce further weakness in the Markets.

Overall, the advisory remains on similar lines that of yesterday. Though the Markets have not breached any serious support levels it is also not likely to see any runaway rise as well and the action would remain stock specific and limited with some sectoral out performance. Keeping this in view, selective purchases may be made but with continued caution and while avoiding any excess leverage. Continuance of positive caution is advised for the day.

The Markets have ended below its 50-DMA levels but have stayed within the filters. Today, expect the Markets to open on a modestly negative note and trade negative in the initial trade and it is expected to test the support at the support line shown on the Charts. There are chances that the Markets attempts to see a technical pullback. However, any slippage below 7815 levels would cause further intermediate short term weakness in the Markets.

The RSI—Relative Strength Index on the Daily Chart is 40.4565 and it has reached its lowest value in last 14-days which is bearish. However, it does not show any bullish or bearish divergence as such. The Daily MACD remains bearish while trading below its signal line.
On the Derivative front, NIFTY October futures have added over 6.31 lakh shares or 4.04% in Open Interest. This shows significant addition of short positions in the system.

Taking cue from pattern analysis, the Markets tested its 50-DMA levels and ended below it but has remained within its filters. If the Markets reverts and closing above it again, it would prove a whipsaw and the Markets would return again to consolidation / trading range. However, any slippage below 7815 levels would induce further immediate short term weakness in the Markets.

Overall, there are fair amount of the Markets attempting a pullback and returning back within the consolidation / trading range. However, until this happens, exercising caution would be imperative and excessive leverage should be avoided. Overall exposure should be kept limited and under control. While continuing with stock specific outlook, positive caution is advised for the day. 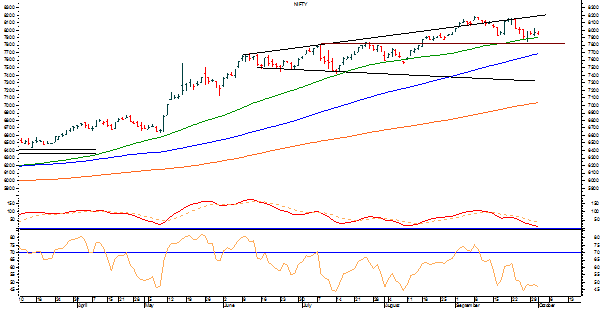 Markets will see some shaky start as it would open today after a slumber of 5 days (3 holidays and a weekend) and while doing so, it would try and adjust to some volatility that the Global Markets saw in these days. With some mildly positive opening expected, the Markets are overall likely to remain in a trading range with some amount of positive bias until it maintains levels above its 50-DMA.

On the derivative front, the NIFTY October futures have shed 62,000 shares or nominal 0.40% in Open Interest. This signifies that there has been no major offloading that was seen on 1st October (previous) session.

Overall, while the Markets adjust to global markets after 5-days of holidays, we would see some amount of volatility ingrained in it. The Markets are likely open and remain positive in the initial trade and some technical pullback in oversold stocks and some buying in select stock specific stocks may be seen. While continuing to maintain a moderate exposure, cautiously positive outlook is advised for the day.