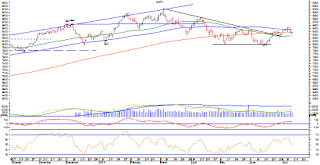 MARKET TREND FOR FRIDAY, JULY 10, 2015
The Markets are expected to open on a modestly positive note and trade positive in the initial trade. The Markets are in consolidation mode and are within its filter of 200-DMA at Close levels and is expected to remain in this range for a while. The Markets are likely to consolidate  with the levels of 200-DMA, i.e. 8384 on the upside. Fresh upsides will only occur above this level and until then, we can expect the Markets to continue to see ranged consolidation. Markets would also react to IIP data coming in evening and also to Inflation figure on Monday.

The RSI—Relative Strength Index on the Daily Chart is 49.6701 and it has reached its lowest value in last 14-days. The RSI has also set a fresh 14-period low but NIFTY has not yet and this is Bearish Divergence. The Daily MACD is bullish as it continues to trade above its signal line.

On the derivative front, NIFTY July futures have shed over 3.20 lakh shares or 1.76% in Open Interest. This shows some unwinding of positions yesterday.

Coming to pattern analysis, the Markets have halted its pullback after failing to move past its 100-DMA. In normal circumstances, it was supposed to consolidate between its 200-DMA and 100-DMA but it has breached its 200-DMA as well. Having said this, it is important to note that it still remains just within the filter of 200-DMA and with today’s positive opening, there are fair chances that the Markets continues to consolidate and shows limited downside risks. However, fresh up move shall occur only after the Markets moves past 8400 levels comprehensively.

All and all, as mentioned, until the Markets moves past 8400-levels, it will continue to consolidate with a mild downside bias. Given this technical structure, it is advised to now restrain fresh purchases and remain away from taking large directional exposures. More liquidity should be maintained and fresh purchases should be curtailed until the directional bias is established. Until then consolidation and mild downside risk would continue. Cautious outlook is advised for today. 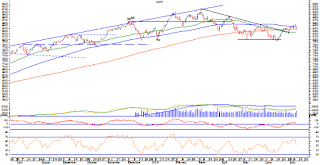 MARKET TREND FOR THURSDAY, JULY 09, 2015
Markets are expected to open on a quiet and flat note and look for directions. Markets have taken support at its 200-DMA at close levels and are within its filter. Today’s session remains very critically important for the Markets and today’s behaviour of the Markets vis-à-vis the levels of 200-DMA would determine the trend for the immediate short term. Irrespective of the opening, it would be very important for the Markets to move past the levels of 200-DMA and trade above that.
For today, the levels of 8384 and 8475 are immediate resistance levels for the Markets. The supports come in at 8320 and 8250 levels.
The RSI—Relative Strength Index on the Daily Chart is 52.0088 and it has reached its lowest value in last 14-days which is bearish. Further, the RSI has set a fresh  14-day low but NIFTY has not yet. This is Bearish Divergence. However, the Daily MACD remains bullish as it trades above its signal line.
On the derivative front, NIFTY July futures have shed over 4.08 lakh shares or 2.19% in Open Interest. This signifies unwinding of the positions to some extent. The NIFTY PCR stands at 1.1 as against 1.14.
Looking at pattern analysis, the Markets have attempted to take support at its 200-DMA at Close levels. It has closed a notch below that but remains within its filter. It would be very critically important to see that the Markets moves past the levels of 200-DMA which is 8383 today. Failure to do so will induce some weakness in the near term for the Markets and will also put some question markets on the reversal that it has confirmed in the previous sessions and also make it vulnerable to test its 50-DMA which is 8270 levels.
All and all, though we are likely to see a quiet opening in the Markets, the behaviour of the Markets vis-à-vis 200-DMA would be critical to watch out for. It would be imperative for the Markets to maintain levels above 8383 and Close above that. Fresh purchases may be made but on very selective and in limited quantity. More liquidity should be maintained and provided for until the Markets take a directional bias above 200-DMA. Cautious outlook is advised for the day.
Milan Vaishnav,
Consulting Technical Analyst,
Af. Member: Market Technicians Association (MTA), USA
Af. Member: Association of Technical Market Analysts, INDIA 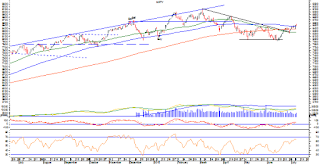 MARKET TREND FOR WEDNESDAY, JULY 08, 2015
Markets once again remain today at a critical juncture. Even with all technical indicators in place, the Markets are likely to open on a negative note following global weakness. In event of the Markets witnessing a gap down opening again, it is likely to find itself below its 100-DMA levels. It would be crucially important for the Markets to maintain support of its 100-DMA at Close levels. In event of the Markets breaching these levels, it may be seen testing its 200-DMA.

The RSI—Relative Strength Index on the Daily Charts is 63.9909 and it remains neutral as it shows no bullish or bearish divergence or failure swings. The Daily MACD remains bullish as it comfortably trades above its signal line.

On the derivative front, the NIFTY July futures have further added over 8.50 lakh shares or over 4.79% in Open Interest. This suggests some good amount of shorts have been added post yesterday’s high and some fresh buying too is indicated from these levels. The NIFTY PCR stands at 1.13 as against 1.12.

Coming to pattern analysis, the Markets have attempted to move past its 100-DMA levels after confirming its bottom after forming a higher bottom at 8195. However, given the rise in the Markets in last couple of session, it is very much likely that the Markets may consolidate at these levels. In any case, the levels of 100-DMA, or in little worse scenario, the 200-DMA is likely to act as its major support. Given the technical indicators and as supported by F&O data, the Markets are likely to have very limited downside. However, in order to consolidate and avoid any weakness, the Markets will have to maintain itself above 100-DMA at Close. If this level breaches, the Markets will find itself consolidating in a little wider range.

Overall, the Markets are likely to see a weak opening but given the technical indicators and the F&O data, we are again likely to see improvement as the session progresses. The Markets are most likely to take support at its 100-DMA at Close levels. If this level breaches, the Markets may find itself consolidating in a wider range with the levels of 200-DMA acting as support. However, we strongly reiterate not to short the Markets as the Markets will have very limited downsides. As usual, while using any initial downsides as a buying opportunity, cautious optimism is advised for the day. 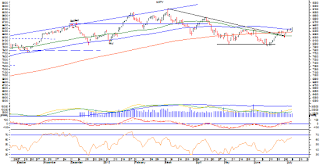 MARKET TREND FOR TUESDAY, JULY 07, 2015
Expect the Markets to open on a flat and quiet note with a positive bias and look for cues in the initial trade. Though the undercurrent remains intact, the Markets may consolidate in the initial trade as it has risen over 150-odd points in the yesterday’s trade. In event of any temporary weakness or any consolidation, the levels of 100-DMA should act as support. This is the resistance level that the Markets moved past yesterday.

The RSI—Relative Strength Index on the Daily Chart is 65.0601 and it has reached its highest value in last 14-days which is bullish. It does not show any bullish or bearish divergence. The Daily MACD remains firmly bullish while trading above its signal line.

On the derivative front, NIFTY July futures have added over 3.87 lakh shares or 2.23% in the Net Open Interest. This is certainly bullish indicators which once again suggest that there has been no short covering in yesterday’s pullback from lower levels. Fresh buying has been seen. The NIFTY PCR stands at 1.13 as against 1.11.

Coming to pattern analysis, the Markets have not clearly confirmed its bottom at 7950-8000 levels. After taking support at these levels, the Markets pulled back, declined to form a higher bottom at 8195 and have once a gain pulled back. This has led to confirmation of this bottom, at least as of now. Given the fact that the Markets have risen over 150-odd points from the lows of yesterday, we may see it consolidating briefly but the undercurrent certainly remains intact.

Overall, all technical indicators and supportive figures point towards continuation of uptrend in the Markets. Even if the Markets consolidates a bit, gathers strength, and remains above its 100-DMA, it should be perfectly fine from any angle. One can continue to make purchases in the select stocks while maintaining vigil on profits at higher levels.