MARKET TREND FOR FRIDAY, JUNE 03, 2016
The Markets displayed excellent strength as after five days of straight gains and just two days of consolidation, it went on to add yet another day of gains. Today, the Markets are once again expected to open on a positive note and look for further gains. Speaking purely on technical grounds, the Markets are tracking the rising trend line drawn and with each passing day, the pattern resistance levels also keep rising.  Given this structure, likely levels of 8280-8300 on the Markets cannot be ruled out. 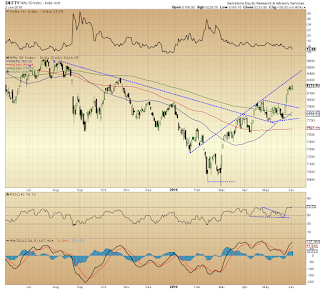 The RSI—Relative Strength Index on the Daily Chart is 70.7186 and it now trades at overbought levels above 70. Though it does not show any bullish or bearish divergence, it has reached its highest value in last 14-days which is bullish. The Daily MACD stays bullish as it trades above its signal line.

On the derivative front, the NIFTY June futures have 20,250 shares or 0.09% in Open Interest. The change in OI remains negligible and overall build up continue to remain on the long side.

Coming to pattern analysis, the Markets broke out from a month-long consolidation formation after taking support at 200-DMA for couple of times and after breaking out on the upside, the Markets posted some 450-odd points of gains. After consolidating for just two days, the Markets have attempted to further its gains again and the next logical levels that the Markets can test are 8280-8300. However, given the overbought nature of the Markets, some amount of resistance cannot be ruled out from higher levels.

Overall, the inherent bias of the Markets continue to remain strong and on upside. However, some caution will have to be exercised given the overbought nature of the Markets. Again, given the inherent bullish undertone, shorts should be strictly avoided. While selective purchases may be made, any levels of above of 8250 should be utilized to book and protect profits.

MARKET TREND FOR THURSDAY, JUNE 02, 2016
Markets displayed good amount of strength yesterday but remained within the range defined in our yesterday’s edition of Daily Market Trend Guide. Today, we are likely to see a quiet to modestly negative opening in the Markets and the Markets are likely to continue to remain in consolidation mode. The levels of 8200-8235 will continue to act as immediate resistance zones for the Markets and fresh up move shall occur only beyond these levels. 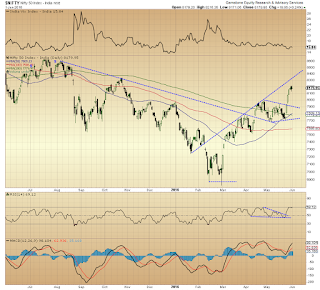 For today, the levels of 8200 and 8235 will continue to act as immediate resistance levels for the Markets. The supports come in lower at 8120 and 8075 levels.

The RSI—Relative Strength Index on the Daily Charts is 69.1181 and this is neutral as it shows no bullish or bearish divergence or any failure swings. The Daily MACD stays bullish as it trades above its signal line. On the Candles, after formation of Engulfing Pattern a day before, a long Upper Shadow occurred yesterday. This continues to signify a potential halt in the current up move.

Coming to derivative front, the NIFTY June futures have shed over 1.30 lakh shares or 0.60% in Open Interest. The NIFTY PCR stands at 1.02 as against 1.04 yesterday.

While having a look at pattern analysis, the Markets are taking a breather after a stupendous up move of over 430-odd points after it broke out from a consolidation formation. Having done this, it tested its logical targets of 8200 levels and has been consolidating since then.
Today as well, it is likely to continue to consolidate and the zones of 8200-8235 will continue to act as resistance zones for the Markets as there are couple of resistance points here. Fresh up move can be expected only after the Markets moves past 8250 levels. The F&O data and the overall structure of the Charts depict a clear possibility of the Markets continuing to remain in consolidation for some more time.

Overall, though shorts at these levels should be avoided, emphasis should be laid on protecting profits on current positions in event of any up moves that we witness until the Markets moves past 8250 levels. Some amount of sector and stock specific out performance will be seen. Overall, a range bound movement with some amount of volatility ingrained in it cannot be ruled out.

MARKET TREND FOR WEDNESDAY, JUNE 01, 2016
While trading precisely on expected lines, the Markets showed signs of fatigue at higher levels and ended with minor losses after five days of straight gains. Today, we can once again expect the Markets to open on a modestly positive note. The Markets will positively react to the decent GDP numbers that we got yesterday but this will not change the technical outlook on the Markets. The Markets will continue to remain under corrective pressure at higher levels and this keeps our analysis on similar lines that of yesterday. 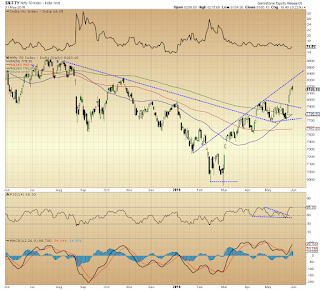 The RSI—Relative Strength Index on the Daily Chart is 68.2992 and it remains neutral as it shows no bullish or bearish divergence or failure swings. The Daily MACD stays bullish as it trades above its signal line. On the Candles, an Engulfing Bearish Line has occurred. Since this has occurred after a significant up move, it marks a potential top for the Markets in the immediate short term. It will require confirmation today.

On the derivative front, the NIFTY June futures have shed 65,700 shares or nominal 0.30% in Open Interest.

Coming to pattern analysis, the Markets broke out on the upside after consolidating in a triangle formation and having done this, it has achieved its technical targets of testing 8200 levels post breakout. We had mentioned logical targets post this break outs using measuring implications in our one of previous editions. Now, there are chances that we might see a positive opening some more up move while the Markets reacts to the positive news flow on the Domestic GDP front, but the zones of 8200-8235 continues to remain a important resistance zone for the Markets given many factors. It is a zone wherein the Markets can fact pattern resistance and it is the 61.8% retracement zones using Fibonacci.  Given these facts the vulnerability of the Markets at higher levels continues to exist today as well.

Overall, we might see a range bound trade today. Volatility may continue to exist and some
up moves may also be seen. However, the Markets remain due for a minor correction and given this fact some amount of consolidation at higher levels cannot be ruled out. While continuing to protect profits at higher levels, cautious outlook is advised for today.

MARKET TREND FOR TUESDAY, MAY 31, 2016
The Markets are trading near its 8 month high and at the same time have started to show some sign of fatigue at higher levels. Today, the Markets are once again expected to start on a flat to mildly positive note but at the same time the intraday trajectory will be important to watch out for as there are chances that the Markets may witness some consolidation from higher levels. 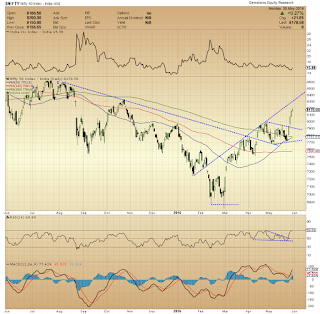 The RSI—Relative Strength Index on the Daily Chart is 69.8945 and it has reached its highest value in last 14-days which is bullish. However, it is nearly overbought and it does not show any bullish or bearish divergence. The Daily MACD is bullish as it trades above its signal line. A Spinning Top on the Candles shows some potential fatigue in the Markets.

On the derivative front, the NIFTY June futures have added over 7.57 lakh shares or 3.62% in Open Interest. The bulk of the OI remains on the long side, nearly to the extent of 82%.

Coming to pattern analysis, the Markets have successfully broken out of the symmetrical triangle on the daily Charts. Yesterday, it tested its technical target of 8200 as a intraday high. We had mentioned often in our previous editions that a logical targets can be 8200 levels if the Markets breaks out of the triangle consolidation. Having said this, it becomes important to note that the Markets have started to show some signs of fatigue at higher levels and it should not be surprising if we see some minor corrections from higher levels.

Overall, some consolidation from higher levels cannot be ruled out. It is also important to note that the level of 8242 is the 61.8% retracement on Fibonacci from 9112-6825 correction and therefore possibility of some correction setting in becomes even more likely. It is likely that we see some brief but intermittent selling bouts from higher levels. However, it is advised that shorts should be avoided at any levels and any up moves should be utilized to book and protect profits.

MARKET TREND FOR MONDAY, MAY 30, 2016
The Markets ended yet another day with gains on Friday and today as well, it is all set to open with some more gains and look for directions. However, at this point, we need to factor in a fact that over last four sessions, the Markets have posted gains of 408-odd points on Close levels and with today’s expected opening gains, the Markets would be up nearly 450-odd points from the low point some 4 days back. This is enough indication that the Markets may show some signs of fatigue post opening and therefore, the intraday trajectory would be important to watch out for. 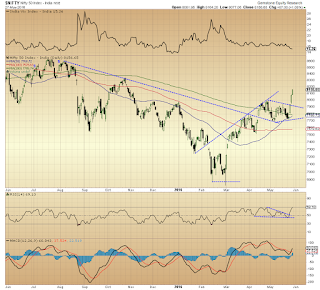 Coming to derivative front, the NIFTY June futures have added over 14.52 lakh shares or 7.45% in Open Interest.

While having a look at pattern analysis, the Markets have broken out from its triangle formation and as mentioned in our previous edition, the logical target that we can look around is 8200 levels. Having said this, it would be also important to factor in that the Markets will show some signs of fatigue and this possibility cannot be ruled out given the fact that it would have risen over 450-odd points in last 5 sessions. The Markets have a pattern resistance around 8200-8225 levels. On the Weekly Charts as well, the current levels show a similar pattern resistance few points from now.

Overall, with an expected positive opening expected, we now advice to reign in a word caution and with every up move, emphasis should now be placed on protecting / booking profits on existing positions. However, some select purchase may be continued to be made in select stocks as well. Overall, continuance of positive outlook is advised for today.