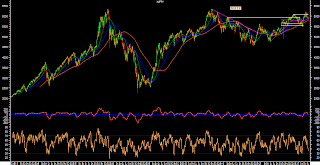 The RSI—Relative Strength Index on the Daily Chart is 34.6470 and it has reached its lowest value in last 14-days which is bearish. It does not show any bearish or bullish divergence. The Daily MACD is bearish as it trades below its signal line.

On the derivative front, the NIFTY June Futures have added over 13.98 lakh shares  or over 11.49% in Open Interest. The same has been the case with BANKNIFTY futures as well. This has been for the first time since last so many sessions that addition in open interest is reported. This signifies that huge amount of shorts have been created and this can lend support at lower levels preventing the Markets from breaking down much.

Overall, the Markets have closed marginally below its 200-DMA. Given this, it would be very necessary and critically important for the Markets to recover and trade above 5794 which is the 200-DMA in case of any weak opening. The positive factor is the very high amount of Open Interest that NIFTY has reported to have been added. This can lend support at lower levels.

All and all, given the reading that very high amount of open interest has been added in NIFTY as well as major stocks, it is advised to strictly refrain from taking any short positions even if the Markets have closed marginally lower than its 200-DMA and even if it opens modestly lower and drifts in the initial trade. There are significant amount of chances that the Markets limits its losses and find supports. Any downside should be utilized to make selective purchases. Overall mildly optimistic outlook is advised for today. 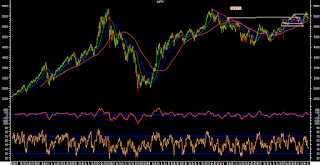 The Markets have headed nowhere yesterday despite stronger opening. Today, on the other side, expect the Markets to open moderately on the lower note and look for directions. Today, the Markets are most likely to open below its 100 and 50-DMA levels and these levels shall act as resistance for the rest of the session. It would be crucial to see if after opening lower, the Markets shows any resilience or continues to drift lower.

For today, since the Markets are expected to open lower, the levels of 5892 shall act as resistance for the rest of the session. The supports come in at 5810 levels.

The RSI—Relative Strength Index on the Daily Chart is 40.5902 and it has reached its lowest value in last 14-days which is bearish. However, it does not show any bullish or bearish divergence. The Daily MACD continues to trade below its signal line and remains bearish.

On the derivative front, NIFTY Jun futures have shed 1.57 lakh shares or 1.27% in Open Interest. This signifies that minor offloading has continued. No shorts have been created or fresh longs have been initiated so far.

Having said this, it is important to note two things. One, the Markets has ended a notch below its 100 and 50-DMA and this is certainly bearish. With the Markets slated to open lower today, these levels shall continue to pose resistance for today as well as for the next days to come. It would be very important for the Markets to move up and trade above 5895-5900 levels in order to avoid any weakness. Two – there is one positive sign as well which can help the Markets to behave in resilient manner. The two DMAs, i.e. the 100 and 50-DMA are attempting a positive crossover. There are chances that the 50-DMA cuts the 100 from above, which is a positive and bullish formation and likely to lend support and resilience to the current Market conditions.

All and all, as of today, the Markets lacks any positive triggers on the upside and the immediate reading is the with the lower opening slated, the levels of 5895-5900 shall continue to pose resistance in the immediate short term. However, with minor chances of recovery from lower levels still remaining, we continue to advice to keep protecting profits vigilantly until the Markets gets clear directional bias. Until this happens, positions too should be maintained in highly selective manner. Overall, cautious approach with mild optimism is advised for today. 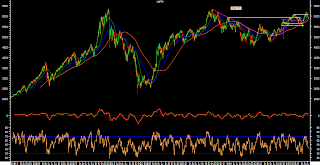 Technically speaking, the Markets have come off its intraday highs on Friday and ended at the day’s lows. Going by this, they would, under normal conditions, open lower and continue with the downtrend. However, the global Markets are trading higher and this is likely to cause a positive and little stronger opening in our Markets. However, the key would be to see the intraday trajectory the Markets forms after opening. It would be critical for the  Markets to sustain opening strength in order to capitalize on the positive opening.

The RSI—Relative Strength Index on the Daily Chart is 40.8089 and it has reached its lowest value in last 14-days which is bearish. However it does not show any bearish or bullish divergence. The Daily MACD is bearish as it continues to trade below its signal line. On the Weekly Charts, RSI is 51.6238 and it is neutral as it shows no bullish or bearish divergences or failure swings. The Weekly MACD remains bullish as it trades above the signal line but is moving towards negative crossover.

On the derivative front, NIFTY has shed a nominal 1.22 lakh shares or 0.98% in Open Interest. The interpretation of this data would be that no shorts were created while the NIFTY came off over 100-odd points. This certainly remains a negative as the NIFTY has been shedding OI in previous sessions on its way down indicating unwinding / offloading and before any sustainable up move, it will have to add to fresh longs.

Having said this, it is important to note that there are no triggers, going through technical indicators and F&O data as well indicating the Markets have an upside. Under these circumstances, there are chances that the Markets see positive and strong opening but is equally likely to fizzle out in the later part of the session. Key would be to capitalize on the opening gains and sustain them and therefore intraday trajectory would be important.

All and all, the Markets, as we mentioned in the previous edition of Daily Market Trend Guide, is still not completely out of the woods. While there has been no breaching of the DMAs significantly, shorts must be avoided. In the same breadth, since the Markets have made an temporary top at 5972 levels, any upside should be utilized to book and protect profits while making purchases on a very selective note.