MARKET TREND FOR FRIDAY, NOVEMBER 18, 2016
The Indian Equities continued to remain “oversold” and once again traded much on analyzed lines. We had mentioned that there are chances of NIFTY continuing to remain oversold and still remain under pressure. The NIFTY ended yesterday with a modest loss and continued to trade below its 200-DMA as well. Today, we continue to keep our analysis on similar lines. Though we may witness a stable opening, the session will remain weighed down by domestic issues and the levels of 8070 will remain critical point to watch at Close levels. 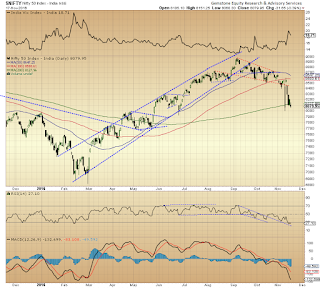 The RSI—Relative Strength Index on the Daily Chart is 26.7502 it has reached its lowest value in last 14-days which is bearish. It does not show any bullish or bearish divergence and it remains very much in “oversold “zone. The Daily MACD stays bearish as it trades below its signal line. On Candles,  a long upper shadow occurred. It is important to note that this is not a classical long upper shadow as current upper shadow is little shorter than what is required, it can leads to potential bottom formation. But once again, it significant diminishes a bit as it is more effective trend reversal signal when it occurs during an uptrend which is not the present case.

On the derivative front, the NIFTY November futures have shed 99,600 or just 0.53% in Open Interest. This figure remains unchanged and therefore no significant creation of shorts or short covering was observed at current levels.

Coming to pattern analysis, the NIFTY has given a downward breakout from a falling channel drawn from 8968 levels. It is now important to note that post the negative breakout on the downside from the falling channel, the NIFTY has completed the measuring implications that arise from such negative breakout. Further to this, it continues to trade a notch below its 200-DMA but still remains within its 1% filter and at the same time remains heavily oversold.

All and all, given the oversold nature of the Markets and given the fact that the NIFTY PCR stands below 0.75 chances of a technical pullback cannot be ruled out even if we continue to remain in a continuing downtrend. However, as mentioned in the beginning, the session may still remain weighed down by domestic issues and we might see some volatile selling bouts but downsides will also remain protected. Overall continuance of a cautious approach with preservation of cash is advised for today.

MARKET TREND FOR THURSDAY, NOVEMBER 17, 2016
The session turned out very much on analyzed lines yesterday. The NIFTY did attempted hard to find a base at current levels but at the same time remained highly volatile as it pared all of its opening gains to end the day on a flat note while still clinging on to its 200-DMA. Today’s our analysis continue to remain once again on similar lines. The NIFTY remains oversold; remains within the filter of 200-DMA, the NIFTY PCR remains well below 0.80 and all this indicate all possibilities of the NIFTY finding a bottom near current levels. However, domestic factors continue to weigh heavy and NIFTY is not out of the woods completely and still remains vulnerable to selling pressures. 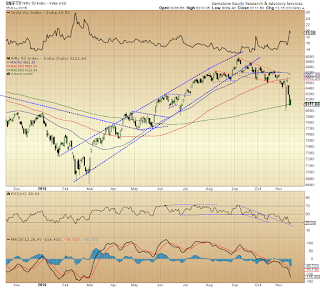 The RSI—Relative Strength Index on the Daily Chart is 27.6941 and it remains neutral as it shows no bullish or bearish divergence or any failure swings. The Daily MACD stays bearish as it continues to trade below its signal line.

On the derivative front, the NIFTY November futures have shed over 6.38 lakh shares or 3.27% in Open Interest. The coming off from opening highs with reduction in OI indicates some inherent weakness in the NIFTY.

Coming to pattern analysis, the current levels of NIFTY offer multiple supports. First, it trades within the filter of its 200-DMA and remains “oversold”. Further to this, the NIFTY PCR which is well below 0.80 indicates oversold status. On the Weekly Charts, it trades in between 50-WMA and 100-WMA and 8070 is one of the major pattern supports on the Weekly Charts. On the other hand, the NIFTY will continue to witness overweighing of domestic issues of demonetization, its resultant effect of consumption over next quarter, etc.  It is important to note that the US10-YR Bonds may have bottomed out as indicated by technical indicators and resultantly, we will see Yields halting its up move. This may help equities to stabilize in the immediate short term.

All and all, as mentioned in our yesterday’s edition, a technical pullback is imminent given the oversold levels of the NIFTY. However, in the same breath, it is important to note that the NIFTY is not yet completely out of the woods. It is strongly advised to refrain from creating any fresh short positions. Dips may be utilized to make selective purchases but only when directional bias gets clearer and some signs of bottom formation are seen. Until that happens, cash preservation with cautiously positive outlook on the Markets is advised.

MARKET OUTLOOK FOR WEDNESDAY, NOVEMBER 16, 2016
Indian Equities had a terribly disappointing session yesterday as it opened much lower than expected and domestic factors weighed heavy on the Markets as NIFTY went on to test its 200-DMA and ended a notch below it while it ended yet another day with a deep cut. Speaking purely on technical terms, we can fairly expect a technical pullback today. First, the NIFTY is yet within the filter of its 200-DMA support and secondly it stands “oversold” as clearly evident on the lead indicators. However, local factors like Demonetization, etc. would still weigh on the Markets which is certain to keep it volatile. 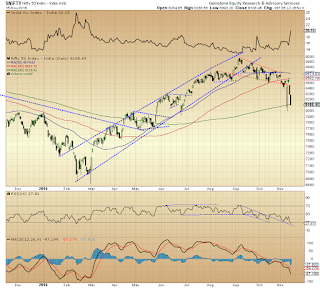 The RSI—Relative Strength Index on the Daily Chart is 27.4575 and it does not show any bullish or bearish divergence. Though it has reached its lowest value in last 14-periods which is Bearish, it clearly remains now in “oversold” territory. The Daily MACD stays bearish as it continues to trade below its signal line.

On the derivative front, the NIFTY November futures have over 20.17 lakh shares or massive 11.52% in Open Interest. This makes hugely evident that massive shorts have been added and this is likely to lend good support to NIFTY at current levels.

Coming to pattern analysis, the NIFTY has ended below its 200-DMA. This is technically bearish but the singular reading of this would be incorrect. It is important to note that NIFTY is still within its filter of its critically important support. Furthermore, the lead indicators clearly show the NIFTY now trading in “oversold” territory. Though it is possible that a issue can trade “oversold” while continuing its downtrend, the huge addition in OI also indicates that it is likely to keep its downsides limited.

All and all, it is very much likely that the NIFTY does not test its immediate previous lows. Even if any intraday bouts occur, now we remain very clearly and evidently exposed to a short covering technical relief rally. Even if the NIFTY continues with its bearish moves, we very categorically advice investors to refrain from creating any major short positions. It should be noted that a technical bounce back is long overdue and imminent even if we remain in a continuing downtrend. Overall, while avoiding shorts and major exposures, cautious but optimistic view is advised for today. Downsides, if any, should once again be continued to be used to make select purchases.

MARKET OUTLOOK FOR TUESDAY, NOVEMBER 15, 2016
The NIFTY ended the session on Friday with a deep cut and gave back nearly a third of its prior two day’s recover, it still showed continued negative ending on closing basis. Today, we can expect some stability to return to the Markets. Opening is expected to be quiet and though we may see intraday volatility, the downsides to the remains limited any dips will remain open to improvement as we go ahead in the session. The levels of 8460 will remain important pattern resistance for the Markets to watch for. 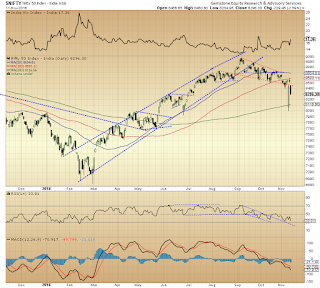 The RSI—Relative Strength Index on the Daily Chart is 33.5323 and it does not show any failure swing. The NIFTY has set a fresh 14-period low on Closing basis but RSI has not and this has formed a Bullish Divergence on the Daily Charts. The Daily MACD stays remains bearish as it trades below its signal line. On the Candles, a formation akin to abandoned baby has formed. However, this would be less effective and damaging as it has not occurred after a rally and has occurred during a downtrend.

On the derivative front, the NIFTY November future have added over 4.93 lakh shares or 2.90% in Open Interest. This signifies that fresh shorts have been added as the decline has come along with addition in Open Interest.

Coming to pattern analysis, it is evident that the NIFTY has given a downward breakout from the falling channel formed since 8968 levels. The return line (Support line or the Lower Line) of that channel which was acting as support will now act as its resistance on NIFTY’s way up. That level is 8460 today as is declining. Having said this, it is also important to note that the NIFTY is near its pattern support on its Closing Charts and downsides from current levels remain very limited.

All and all, even if we continue to remain in continuing downtrend, there are high possibilities of a technical pullback in today’s session or in sessions to come. It is reiterated to continue to use all downsides to make select stock specific purchases. Shorts should be avoided as short trap may occur. Overall, which maintaining a cautious view on the Markets, optimistic outlook is advised for today.