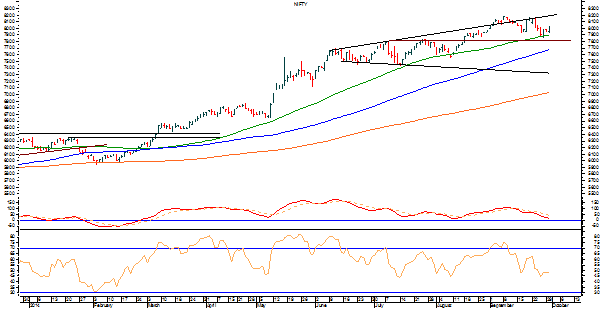 The analysis for the Markets remains more or less on similar lines. The Markets are expected to open on a quiet note and are likely to trade overall in a capped range. Volatility shall remain ingrained in the session. However, there are little chances of the Markets giving a run-away rise as tomorrow remains last trading day of the Week. The Markets shall remain closed on Thursday (Gandhi Jayanti), Friday (Dussera) and on Monday on account of Bakri ID. So, after Wednesday’s session, the Markets would only re-open on Tuesday.

The RSI—Relative Strength Index on the Daily Chart is 48.4132 and it remains neutral as it shows no bullish or bearish divergences or any failure swings. The Daily MACD continue to remain bearish as it trades below its signal line.

On the derivative front, NIFTY October futures have added over 1.97 lakh shares in Open Interest. This signifies that some fresh short positions are seen being created in the system.

Returning back to pattern analysis, the Markets have continued to remain in a broad trading range and therefore would continue to consolidate with upward bias so long as it maintains itself above its 50-DMA levels at Close. If the Markets breach these levels, it would invite some more weakness and would see itself entering a intermediate downtrend. However, until this happens, it would continue to consolidate with quite good amount of volatility in a broad range.

Overall, keeping this mind, the Markets would continue to see stock specific and sectoral out performance. Even if the Markets see some mild up moves, it is advised to continue to keep leverage under control and overall exposure limited. There are also chances that the Markets see some profit taking at higher levels, especially due to mini-vacation that is ahead. Overall, continuance of cautious outlook with selective but limited exposure is advised for the day. 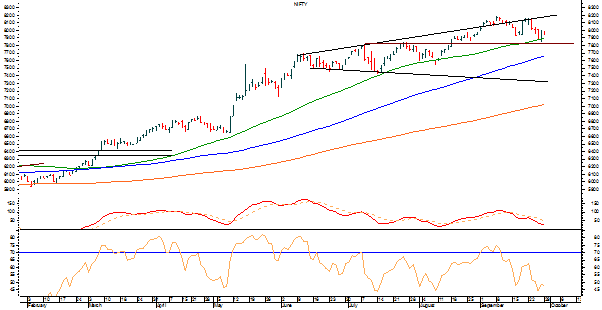 Expect the Markets to once again open on a flat note. The Markets may trade flat and indecisive in the initial trade but is later expected to react to the RBI Credit Policy announcements that will come up later. Though nearly all market participants expect the rates to remain unchanged, any slightest of the surprise, on either side would have the Markets sharply react to that.

The RSI—Relative Strength Index on the Daily Chart is 47.9441 and it remains neutral as it shows no bullish or bearish divergences or any failure swings. The Daily MACD remains bearish as it trades below its signal line.

On the derivative front, the NIFTY October futures have shed over 9.05 lakh shares or 5.52% in Open Interest. This is certainly not an encouraging reading as it demonstrates unwinding /reduction of long positions as the reduction in OI has come with the loss in NIFTY levels.

Overall, the Markets would also remain range bound and bit listless because of short trading week. Wednesday would remain the last trading day and a mini vacation follows after that. RBI Rate announcements would be closely watched and any surprise would be sharply reacted to. Apart from that, overall, with the Markets expected to remain in range amid low volumes, it is advised to refrain from creating over exposure in the Markets. Excess leverage should be avoided while maintaining caution during the day. 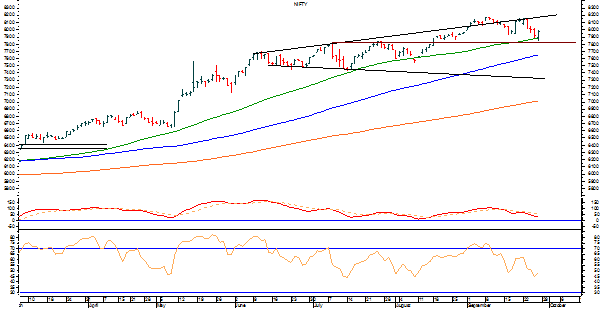 Expect the Markets to open on a flat to mildly positive note and continue with its up move. Over and above technical possibilities of the Markets continuing to pullback, it has held on to its support of 50-DMA at Close levels. The intraday trajectory of the Markets and close above the levels of 7885 would be important in order to avoid any further weakness from creeping in. However, volatility and some more corrective pressure at higher levels cannot be ruled out.

The RSI—Relative Strength Index on the Daily Chart is 48.6387 and it remains neutral as it shows no bullish or bearish divergences or failure swings. The Daily MACD still continues to trade bearish, below its signal line. On the Weekly Charts, the RSI is 66.2126 and it has just crossed below from a topping formation which is bearish. The Weekly MACD has reported a negative crossover and is now bearish as it trades below its signal line.

On derivative front, the NIFTY October futures have added over 6.30 lakh shares or 4% in Open Interest. This shows that apart from sharp short covering from lower levels, some fresh addition of longs too have been reported.

Returning again to pattern analysis, the Markets have so far held on to two things. One, resisting at upper boundary line of the broadening formation and second, the levels of 50-DMA at Close on the downs side. In the coming week, the Markets will more or less remain in range and are not likely to give a runaway rise or any steep downfall as such as well. The overall activities would remain in a broad trading range with good amount of volatility ingrained in it.

Overall, reading the Weekly Chart as well, the Markets have formed an immediate top and so long as it maintains a Close above the levels of 7885, it would continue to remain in trading range.  However, with no structural breach on the Charts, shorts too should be avoided and on the other hand all profits should be protected at higher levels. While continuing to remain selective, cautious outlook is continued to be advised.