MARKET TREND FOR FRIDAY, JULY 29, 2016
The Markets had a buoyant end to the July series while it ended yet another day with gain fuelled global liquidity and positive sentiments. Today as well, as the country inches very near to GST becoming a reality, the Markets may open on a flat to mildly positive note and look for directions. Though the technicals clearly suggest that the Markets may consolidate at  higher levels, immediate major downsides remain limited and the domestic factors are likely to provide positive cues to the markets. 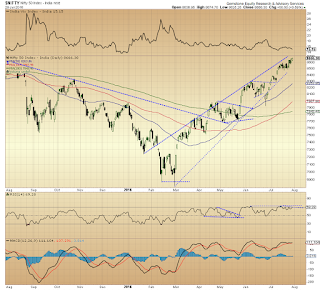 The RSI—Relative Strength Index on the Daily Chart is  69.28 and it inches near to its overbought territory. The RSI does not show any failure swing but while NIFTY has formed a fresh 14-period high for the Markets, the RSI has not done so and this has resulted in Bearish Divergence on Daily Charts. The Daily MACD stays bullish as it trades above its signal line.

On the derivatives front, the NIFTY August series have added in net open interest. The NIFTY PCR has begun with 1.24 as compared to 1.08 and this remains bit on the higher side.
While having a look at the pattern analysis, the Markets have continued to remain in the upward rising channel and have been continuing to track the upper rising line of the said channel drawn from February lows. Having said this, it is much evident from the overall structure of the Charts that the Markets are being fuelled explicitly by the gush of global liquidity and while it continues to inch upwards, the corrections have been mainly in form of intraday dips or range bound consolidation. However, having said this, this very structure of the Markets continue to it itself vulnerable to intermittent bouts from higher levels.

Overall, the lead indicators persistently suggest signs of fatigue at higher levels. However, the Markets may not correct much and the corrections may remain limited to range bound consolidations and intermittent profit taking bound. It would be important to note that the Markets will continue to remain exposed to intraday volatility and out performance will remain limited to specific stocks. While keeping purchases limited and guarding profits at higher levels, cautious outlook is advised for the day.

MARKET TREND FOR THURSDAY, JULY 28, 2016
The Markets continued to heavily consolidate and ended the day with modest gains after coming off nearly 80-odd points from the high point of the day. Today, we are likely to see a flat opening again and the session will remain dominated heavily with rollovers as we enter the expiry of the current derivative series. The resistance zone of 8640-8660 continue to remain sacrosanct for the immediate short term. 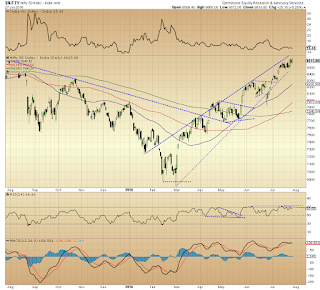 For today, the levels of 8640 and 8660 will continue to act as immediate resistance levels for the Markets. The supports come in lower at 8590 and 8550 levels.

The RSI—Relative Strength Index on the Daily Chart is 66.6632 and it remains neutral as it shows no bullish or bearish divergence or any failure swing. The Daily MACD stays bullish as it trades above its signal line. However, this is moving towards reporting a possible negative crossover.

Coming to pattern analysis, as mentioned in our previous edition, the Markets have so far failed to confirm a breakout on the upside post 8600 levels and there has been no confirming consistent up move. Having said this, it becomes important to reiterate that the Markets have been showing signs of fatigue on Daily Charts and despite the fact that the internals remain buoyant,, some amount of minor correction cannot be ruled out at higher levels. Presently, the Markets continue to remain in the broad rising channel drawn from February lows.

All and all, today being expiry of current series, the session is likely to remain heavily dominated with rollovers. Also, with the signs of fatigue showing up on daily charts, any up move will continue to remain vulnerable for a sharp intermittent selling bouts just like yesterday. We continue to reiterate to use all possible up moves in protecting profits and existing positions and keep fresh purchases highly selective and limited. Overall, cautious outlook is advised for today.

MARKET TREND FOR WEDNESDAY, JULY 27, 2016
Keeping perfectly in line with the analysis carried out yesterday, the Markets did not continue with its attempted breakout and saw it consolidating once again at higher levels. The Markets saw some pressure returning from higher levels while it kept the resistance levels of 8650-8670 sacrosanct. Today, once again, we will see the Markets opening on a flat note and levels of 8650 will continue to act as immediate resistance. Today we enter the penultimate day of expiry of current derivative series and we will see the trade remaining dominated with rollovers. 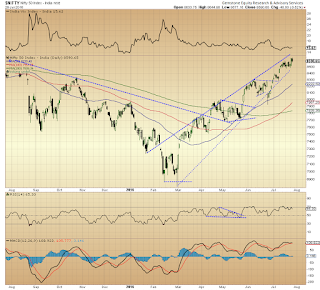 The RSI—Relative Strength Index on the Daily Chart is 65.2969 and it has just moved below its overbought territory. It stays neutral showing no bullish or bearish divergence or any failure swings. The Daily MACD continues to stay bullish as it trades above its signal line.

Coming to pattern analysis, the Markets did make an attempt to break out above the 8600 levels following several days of consolidation. However, as mentioned yesterday, the Markets had got overbought and had demonstrated some signs of short term fatigue on the Daily Charts. The Markets did make an attempt to continue with its up move, it saw some selling pressure coming in from higher levels and it continued to consolidate after posting modest losses.

Overall, though the Markets continue to remain in an overall uptrend, it is likely that it continues to consolidate for couple of more day’s time. The inherent trend continues to remain intact but the levels of 8650 will be critical to watch out for. Any up moves should be best utilized to protect profits on existing positions as all upsides will continue to remain vulnerable to intermittent bouts of profit taking at higher levels.

MARKET TREND FOR TUESDAY, JULY 26, 2016
The Markets finally attempted a breakout after several days of range bound consolidation and ended the day with decent gains. Speaking purely on technical grounds, the Markets are likely to open on a modestly positive note and continue with its up move. However, though this is most likely to happen, the Markets have become overbought once again and therefore some amount of consolidation happening again at higher level cannot be ruled out. Liquidity has been chasing the Markets and this is likely to continue to happen in the immediate short term. 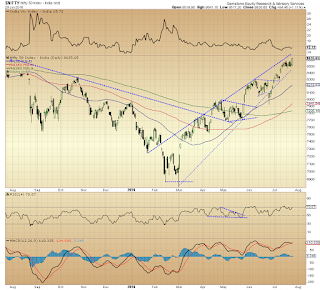 The RSI—Relative Strength Index on the Daily Chart is 70.0686 and it now once again trades in “overbought” territory. Though it does not show any failure swing, the NIFTY has formed a fresh 14-day while RSI has not and this has caused Bearish Divergence. The Daily MACD stays bullish as it continues to trade above its signal line.

Coming to pattern analysis, though the Markets have attempted to move out and give a breakout on the upside from the severe consolidation that it witnessed over previous week, it has now also shown some signs of weariness and fatigue on the Daily Charts. If the breakout is successful and the Markets continue to surge ahead, it would still continue to track the upper rising trend line of the channel drawn from February lows and it might test the 8700-8725 levels. However, the signs of fatigue are little evident and some minor corrections from higher levels cannot be ruled out.

Markets will also watch FOMC meet that begins today though rate hikes for 2016 stand ruled out. The Markets trade in “overbought” territory and the lead indicators showing bearish divergence may decrease the momentum of the Markets going upward. It is advised to make selective buying but more emphasis should be used to exit and protect profits with each up move. Positive caution is advised for today.

MARKET TREND FOR MONDAY, JULY 25, 2016
As evident from the Daily Charts, the Markets have spent the entire previous week in a range bound consolidation and it traded in a capped range maintaining positive bias. The Global Markets trade stable to positive and with no negative technical cues, the Markets are well expected to continue with its consolidation this week as well. Volatility will refuse to leave as we begin with expiry week of current derivative series. We can fairly expect the Markets to open on a quiet and flat to mildly positive note and look for directions. 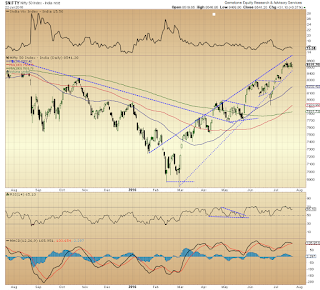 Overall, while the inherent trend continuing to display buoyancy, the Markets too continue to show strength while remaining in range bound consolidation. With inherent trend intact, any downsides should be continued to be used to make selective purchases. While sectoral rotation will continue on weekly basis, continuing positive outlook with vigil eye over 8595-8610 range is advised for today.