MARKET TREND FOR FRIDAY, JULY 15, 2016
Global liquidity continued to fuel the Markets as after initial consolidation on a lower note, the Markets continued with its up move to end the day with modest gains. Today, speaking purely on technical grounds, the Markets are expected to continue with its up move, at least in the initial trade. Today, we can expect a quiet to modestly positive opening in the Markets once again. The Markets are likely to test its logical target levels of 8600-8610 as we had analyzed in one of our previous editions. However, given the pattern analysis, it would be critically important to see the behavior of the Markets at 8600-8625 zones. 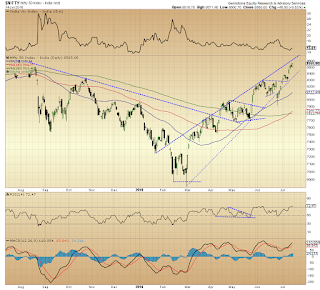 The RSI—Relative Strength Index on the Daily Chart is 72.4695 and it has reached its highest level in 14-days which is bullish. However, it trades in “overbought” zone and it does not show any bullish or bearish divergence. The Daily MACD is bullish as it trades above its signal line. On the Candles, an engulfing bullish candle has occurred. Since this has occurred at the high point and after a good up move, this can act as a potential short term top for the Markets.

On the derivative front, the NIFTY July futures have went on to add yet another over 6.24 lakh shares or 2.91% in Open Interest. The NIFTY PCR stands at 1.08 as against 1.04 yesterday.

Coming to pattern analysis, the Markets have been rising sternly within the rising channel drawn from February lows. Post achieving breakout over 8295 and after couple of days of consolidation in between, the Markets have continued to display great inherent buoyancy. Having said this, as we had mentioned couple of times in our previous editions, the logical targets of this can be anywhere in the range of 8600-8625 levels. At these levels, the Markets would touch / test its logical pattern resistance levels. It would be important to see the behavior of the Markets at these levels.

Overall, today’s opening levels are expected to see the Markets being very near to its first pattern resistance levels of 8600. The Markets are “overbought” and they tend to remain overbought for some time in buoyant times. The current rally is being fuelled by global liquidity which has happened because of a tactical shift to equities happening after sharp decline in bond yields. However, all this certainly make the Markets buoyant but does continue to keep it vulnerable to sharp intraday selling / corrective bouts at higher levels. Though overall buoyancy is evident, some consolidation at higher levels cannot be ruled out.

MARKET TREND FOR THURSDAY, JULY 14, 2016
The Markets continued to consolidate in yesterday’s session and traded much on analyzed lines as it ended flat with nominal losses after remaining in tight range. Today, we continue to put our analysis on similar lines. The Markets are likely to see a quiet and flat opening and it has shown increased signs of fatigue at higher levels. It is very much likely that it continues to remain with a capped upside with vulnerability of selling bouts at higher levels. 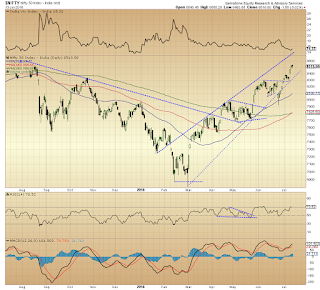 The RSI—Relative Strength Index on the Daily Chart is 7051.93 and it remain in “overbought” territory. It does not show any failure swing. It also does not show any bullish or bearish divergence. The Daily MACD remains bullish as it trades above its signal line. On the Candles, a black candle very near to a hanging man has appeared. Though this is not a classic hanging man formation, it does show a potential halt in the uptrend in the Markets.

On the derivative front, the NIFTY July futures have added yet another over 1.79 lakh shares in Open Interest. The NIFTY PCR stands at 1.04 as against 1.24.

If we look at pattern analysis, the Markets gave a break out on the upside while moving past its previous intermediate top of 8295-8298 levels. It broke out on the upside, consolidated again for a couple of days and went on to put on further gains. The Markets have risen nearly 225-odd points since its last previous top and nearly 575-odd points from the June 24th lows. Though it has fortified its up moves by intermittent consolidation, the Markets are now showing some signs of weariness as well. It did tested its logical targets of 8550 but it now trades in “overbought” territory and the breadth is getting little weaker.

Overall, keeping into account that the lead indicators trade overbought and the breadth has grown weaker over previous couple of sessions, we cannot rule out the possibility of the Markets consolidating or showing corrective profit taking bouts at higher levels. It is reiterated to keep purchases limited to sectors that are witnessing rotational preference and use all up moves in protecting existing positions in the Markets. However, corrections, if any, will be healthy for the Markets as the inherent trend remains buoyant.

MARKET TREND FOR WEDNESDAY, JULY 13, 2016
The Markets traded pretty much on analyzed lines yesterday, did show some intraday corrective bout but finally ended the day with gains after pulling back in the second half. Today as well, we continue to set our analysis on similar lines. We can fairly expect the Markets to open on a flat to mildly positive note and look for directions. However, Markets has been showing some signs of weariness and it vulnerability to selling bouts from higher levels cannot be ruled out.

The RSI—Relative Strength Index on the Daily Chart is 70.6776 and it now trades in overbought territory. However, it has reached its highest value in last 14-days which is bullish. It does not show any bullish or bearish divergence. The Daily MACD is bullish as it trades above its signal line. On Candles a rising window occurred again. This usually implies continuation of bullish trend. There have been 10 rising windows in the last 50 Candles which portrays overall strong picture.

On the derivative front, the NIFTY July futures have added yet another over 13.13 lakh shares or 6.58% in Open Interest. This continues to display inherently bullish picture of the Markets.

Coming to pattern analysis front, as repeated often in our previous editions, the Markets have not only recovered all of its losses from the lows it made on June 24th but have went on to post a breakout while moving past its previous top. It has attempted a further breakout as a continuation of its uptrend after it consolidated for a couple of days. The uptrend is likely to continue today as well however the Markets have been showing some signs of weariness at higher levels.

Overall, it is important to note that the Markets are now overbought and the breadth has been little negative showing some signs of weariness. Also, it has reason over 250-odd points after breaking out from its previous top. All this point towards  some vulnerability of the Markets towards witnessing some profit taking bouts from higher levels. Since the undercurrent remains adamantly buoyant, such corrections / consolidation may remain very range bound we may not witness any significant damage. However, no every rise should be utilized more on protecting profits at higher levels. The defensives sectors and the laggards over previous week will continue to outperform.

MARKET TREND FOR TUESDAY, JULY 12, 2016
The Markets staged a very sharp up move yesterday tracking stable and strong Global Markets and favorable technicals while it ended the day with robust gains after a brief consolidation over couple of days. Today, speaking purely on technical grounds, the Markets are likely to continue with its up move, at least in the initial trade. Today, we can fairly expect the Markets to open on a modestly positive note and continue with its up move in the initial trade. However, thereafter, given the very sharp rise, the Markets may again consolidate a bit at higher levels. 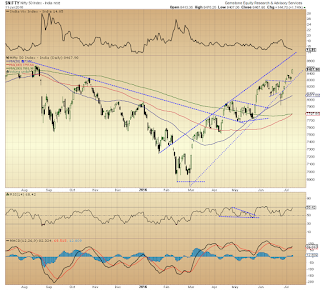 The RSI—Relative Strength Index on the Daily Chart is 68.4194 and it has reached its highest value in last 14-days which is bullish. It does not show any bullish or bearish divergence. The Daily MACD is bullish as it trades above its signal line. On the Candles, a  rising window has occurred. This usually applies continuation of bullish trend.

On derivative front, the NIFTY July futures have over 16.78 lakh shares or 9.19% in Open Interest. This shows creation of fresh long positions and likely continuance of uptrend.

Coming to pattern analysis, the Markets showed a throwback to its breakout levels of 8295 zone after the initial breakout and while it consolidated for couple of days it has resumed its up move again and in the process moved past its previous high of 8398-8400 levels. Having said this, this very clearly implies that the inherent strength of the Markets remains intact and they continue to remain in overall up trend. However, given the sharp up move with gap yesterday, even if the Markets continue to show strength, some amount of minor consolidation again at higher levels cannot be ruled out. However, the Markets are likely to continue towards its logical targets of 8550-8600 levels.

Overall, it is more than evident that the Markets are currently in its upper rising channel with continuing up trend. However, given the sharp moves, it may show some minor consolidation again at higher levels even if it continues to edge higher. Also, some sector rotation would be seen this week and we will see some defensive sectors leading the Market performance and showing relative out performance. Overall, with inherent strength intact, positive outlook is advised for today.

MARKET TREND FOR MONDAY, JULY 11, 2016
The Markets continued to trade in the prescribed range on Friday and while it ended the day with modest losses, it did take support on the rising trend line drawn from February lows. Today, we can expect a positive opening in the Markets supported by stable global cues. However, with the Friday’s low acting as support, it would be important to see if the Markets are able to sustain and capitalize on expected positive opening. The levels of 8400 will continue to act as immediate top for the Markets. 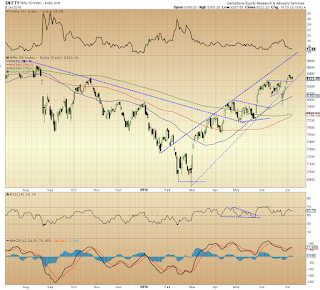 On the derivative front, the NIFTY July futures have shed over 4.01 lakh shares  or 2.15% in Open Interest. For the Markets to stage a possible continuation of uptrend, it needs to build up on fresh position.

On the pattern analysis front, the Markets have managed to keep themselves once again in the broad upward rising channel which is drawn from February lows. Having said this, as mentioned often in our previous editions, the Markets have managed to move past its previous top of 8298 and have given a fresh upward breakout. However, after forming an intermediate top of 8398 and rising nearly 400-odd points from the lows that it formed on June 24th, it has been consolidating in a capped range and has taken support on the rising trend line drawn from February lows.

With a positive opening expected, we continue to reiterate that even if the Markets continue to consolidate, its inherent strength is quite evident and the undercurrent remains buoyant. Any consolidation or profit taking bouts that we witness should be utilized to make fresh purchases. However, we will continue to see sectoral out performance and some rotational shifts in the exposures is also likely to be witnessed. Overall, positive outlook is advised on the Markets today.