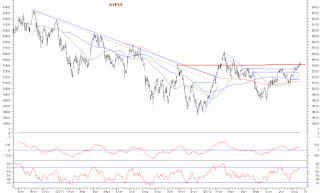 The RSI—Relative Strength Index on the Daily Chart is 67.2580 and it is neutral as it shows no negative divergence or failure swings. The Daily MACD continues to trade above its  signal line. The NIFTY and Stock Futures have added nominal open interest and the NIFTY PCR stands unchanged at 1.32.

The Markets have ended the day yesterday at 5415.35 and today, if it opens below the levels of 5400, the same levels would act as resistance unless the Markets moves past those levels. So, in event of a weaker opening, it would be important for the Markets to trade above the levels of 5400 and if not done so, some further corrective weakness can be expected. 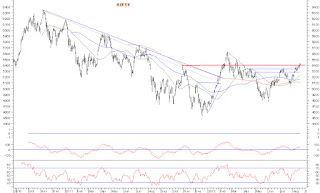 Today’s session also likely to remain equally directionless, range bound and volatile like that of yesterday as though the Markets have managed to hang on above the levels of 5400, there has been no comprehensive breakout with volumes. The intraday trajectory would therefore be critical as it would dominate the trend for today.

The RSI—Relative Strength Index on the Daily Charts is 67.0424 and it is neutral as it shows no negative divergence or failure swing. The Daily MACD continues to trade above its signal line.

There has been net decrease in NIFTY Open Interest to the extent of 2.57 lakh shares or 0.97%. This signifies long unwinding of NIFTY from higher levels. So, the levels of 5433-5450 remains technical resistance for the Markets.

As mentioned earlier, there is no comprehensive breakout as the Markets moved past the 5400 levels and instead it is consolidating again and yesterday it ended the quite off from its highs.

All and all, it is likely that consolidation continues in the Markets and the Markets may find it difficult to remain above the levels of 5400. Even if it sees temporary rise like yesterday, there are equal amount of chances that we see bouts of profit taking from higher levels. However, this time, sectoral outperformance would be witness as the sectors like Pharma and IT can outperform. However, very selective approach with protection of profits at higher levels is advised for today.

Due to a technical glitch, we have not able to publish your copy of Daily Market Trend Guide in regular PDF Format. We are reproducing the text version of "Market Trend For Today". Inconvenience caused is seriously regretted.

MARKET TREND FOR TODAY
After yesterday's sharp up move in the last hour of the trade, we strongly expect some profit taking to set in and the Markets to open on a negative note and look for directions. The key would be to see if it opens above or below 5400 and its subsequent behavior vis-a-vis those levels after the opening.

The RSI--Relative Strength Index on the Daily Chart is 68.41 and the Daily MACD continues to trade above its signal line.

It is extremely important to observe at this point that in the yesterday's rise, both Stock and NIFTY futures have shed net open interest. This means that there  was bulk of short covering and less of fresh longs in the Markets. The key would be to see if they get replaced with fresh longs, or the profit taking sets in.

All and all, as per the techniacls, which says the Markets have NOT moved past its filters and as per F&O Data, there are chances that we may see consolidation or more possibly profit taking with lower opening expected. It is strongly advised that there is no conviction, as of today, and retail investors should not get carried away with such rise until directions get clear. All and all, refraining from aggressive positions with cautious outlook is advised for today.
Milan Vaishnav,
Consulting Technical Analyst,
www.MyMoneyPlant.co.in
http://milan-vaishnav.blogspot.com
+91-98250-16331
milanvaishnav@mymoneyplant.co.in
milanvaishnav@yahoo.com 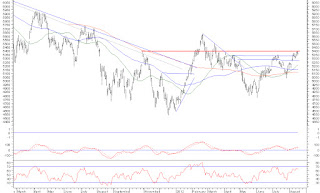 Today, again expect the Markets to open on a moderately negative note and continue with the corrective activity that we witnessed on Friday. The Markets shall open on a quietly flat to negative note and look for directions and the intraday trajectory would be important to influence the trend for today.

The key levels of 5375-5400 shall continue to act as key resistance levels.

The RSI—Relative Strength Index on the Daily Chart is 63.8206 and is neutral as it shows no negative divergence or failure swings. The Daily MACD continues to trade above its signal line.

There are  two important things that are necessary to be noted. First, the key levels of 5400 that we have been mentioning in our previous editions of the Daily Market Trend Guide have continued to act as key resistance and shall continue to do so and sustainable up move shall occur only after the Markets moves past these levels. Secondly, the Markets are showing some immediate short term signs that the Markets have continue to show little more correction as the NIFTY has shed over one lakh shares in Open Interest.

Having said this, it is also important to note that the Markets moving past the levels of 5400 would be an attempt of continuing trend reversal after making two higher highs after giving a low of 4531 in December 2011. So, it is extremely important for the Markets to move past this level of 5400 and in the same breath, no sustainable up move shall occur unless the Markets moves past this level.