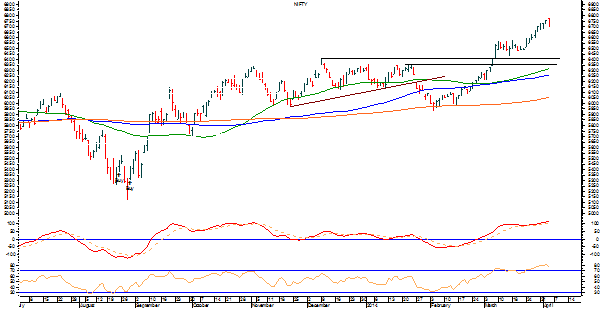 Though the Markets ended yesterday with just nominal losses, it has formed a potential top at 6776 and this would act as a immediate top for the Markets. The Markets are slated to open on a modestly negative note and continue with its corrective activities, at least in the initial trade. The intraday trajectory would be crucial but the overall trend is likely to remain in the corrective mode.

For today, the levels of 6776 would continue to act as immediate top for the Markets. No sustainable up move shall occur until the Markets moves past this level. The support exists at 6685 and 6610 levels.

The RSI—Relative Strength Index on the Daily Chart is 77.9767 and it is neutral as it shows no bullish or bearish divergence or any failure swings. However, it continues to trade in the extremely “overbought” territory. The Daily MACD continues to trade above it signal line.

On the derivative front, the NIFTY April futures have shown a minor shedding of over 1.28 lakh shares or 0.74% in Open Interest. This shows that some short covering was witnessed from lower levels in the last 30 minutes of the trade and there has been minor unwinding of positions.

Going by the pattern analysis, the Markets continues to remain heavily in overbought territory. Also, the levels of 6776.75 has no become a immediate top for the Markets. Any sustainable up move shall occur only after the Markets move past this level.  Given the extent of the markets being “overbought”, if this happens too soon, it would be little unhealthy for the Markets.

All and all, while keeping our analysis on the same lines as previous two day, we continue to advise to keep protecting profits at higher levels. Some stock specific performance would be seen as sectoral churning happens but it is advised to not to remain over-leveraged in the Markets. While remaining moderate on the exposures, continuance of cautious outlook is advised for today. 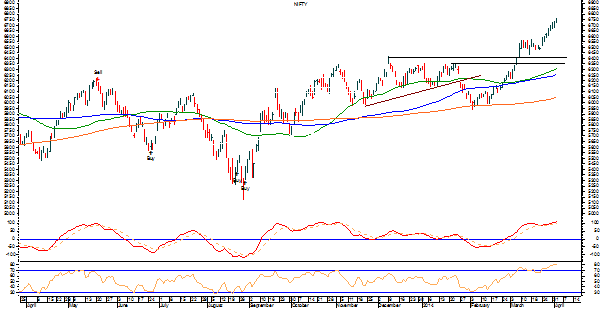 The Markets are now very explicitly in extremely overbought condition and are almost being “rigged” but unabated cash flows. The Markets are once again slated to see a flat to modestly positive opening. However, given the current condition of the Markets, we strictly advise the retain investor not to get carried away in a frenzied buying and remain extremely stock specific. The Markets have all the ingredients of a long overdue and imminent correction.

The Markets continue to trade in uncharted territory. The levels of 6790 and 6820 might see some resistance on the upside. The supports exist much lower at 6680 and 6610 levels.

On the derivative front, the NIFTY April futures have added over 2.46 lakh shares or 1.45% in Open Interest showing addition in long positions.

Going by the pattern analysis, the Markets have now got into most unhealthy pattern given the parabolic rise that it has witnessed. It is overbought from all angles however, it continues to remain so backed by heavy cash inflows from the FIIs. However, so far as retail investors are concerned, it is important to note that the Markets are heavily overdue for an imminent correction as such rise, which is almost similar to “rigging” certainly has now got unhealthy. It might happen that whenever the FIIs are done with their activity and when the correction sets in, once gets badly caught at the extremely higher levels.

Overall, the analysis remains more or less on the similar lines that of yesterday. The Markets would open positive and at the same time, it would carry equal chances of showing much overdue correction. We continue to reiterate our advice to remain extremely stock specific while protecting profit at higher levels. Blanket buying should be avoided and high degree of caution is advised for today. 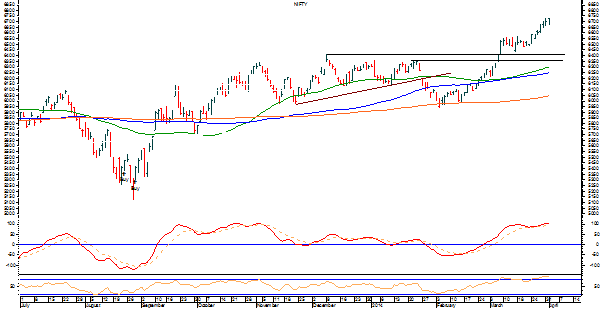 Markets remains heavily into “overbought” territory and today it is likely to see modestly positive opening once again. However, as appears from the Charts, though the Markets may see some strength in the opening trade, it is likely to continue to see consolidation from higher levels. The intraday trajectory it forms would be very critical to decide the trend but overall, some consolidation / correction from higher levels is overdue.

For today, the levels of 6745 and 6770 would be immediate resistance levels for the Markets though it continues to trade in uncharted zone. The supports would exist at 6650 and 6610 levels.

The lead indicators continue to remain overbought. The RSI—Relative Strength Index on the Daily Chart is 79.7021 and it has reached its highest value in last 14-days. Though it does not show any bullish or bearish divergence, it remains in extremely “overbought” condition. The Daily MACD trades above its signal line.

On the derivative front, the NIFTY April futures open interest has remained virtually unchanged as it has added a nominal 11,700 shares or 0.07% in Open Interest. This very clearly indicates that there have been no offloading of any positions and also no fresh build up of positions that was seen.

Overall, the Markets may see positive opening but at the same time, it is likely that we see some minor profit taking towards the end or as we go ahead in the session. Some amount of consolidation / minor correction in the Markets is overdue and such unabated up moves with this condition of lead indicators are making the Markets unhealthy as present. It is advised to avoid creating fresh positions and continue to protect profits at higher levels. Overall, continuance of cautious outlook is advised for today. 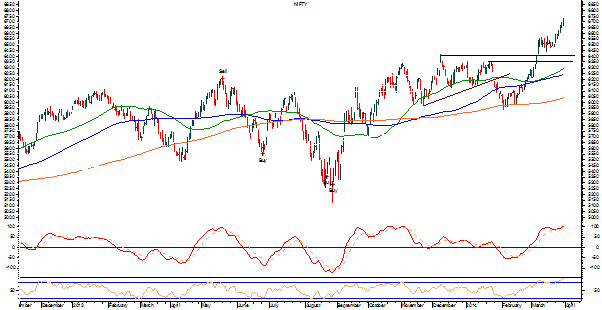 Today, expect the Markets to open again on a modestly positive note and look for directions. However, the trade would remain more or less on similar lines that of yesterday as the Markets are likely to come off after positive opening as we go ahead in the session. The signs of imminent correction appear evident and it would also react to RBI’s credit policy wherein the March CPI is seen around 8.7%.

The lead indicators continue to remain in extremely overbought territory. The RSI—Relative Strength Index on the Daily Chart is 78.8726 and it has reached its highest value in last 14-days. However, it continues to remain in very “overbought” condition. The Daily MACD remains bullish as it trades above its signal line and it is about to enter overbought territory as well.

On the derivative front, NIFTY April futures have added 1.02 lakh shares or 0.61% in Open Interest. This shows no major offloading of positions seen even when the Markets came off from its opening highs.

Going by pattern analysis, the Markets continue to remain in extremely overbought condition. In such cases, even if we see continuation of up move it gets very risky and less sustainable if that happens without any correction or consolidation and especially with the indicators continuing to remain in “overbought” condition. Some amount of correction would be healthy for the Markets.

All and all, the analysis would remain on similar lines that of yesterday and we can see some paring of gains from higher level again. We continue to advice to refrain from making blanket purchase and protect profits at higher levels. Fresh buying should be avoided or should be make extremely selectively. Cautious outlook is advised for today.