MARKET TREND FOR FRIDAY, April 22, 2016
The Market’s up move has been halted over previous two sessions. Once again, with no structural change in the Daily Charts, today’s analysis once again remains on similar lines. We are likely to see a quiet opening in the Markets and the levels of 7950 will continue to pose immediate resistance to the Markets. Therefore, the intraday trajectory of the Markets and its behavior vis-à-vis its 200-DMA will be important to watch out for. 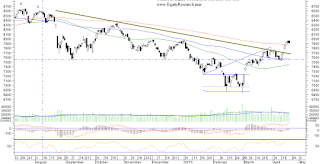 The RSI—Relative Strength Index on the Daily Chart is 67.4745 and it remains neutral as it shows no bullish or bearish divergence or any failure swings. The Daily MACD continues to stay bullish as it trades above its signal line.

On the derivative front, the NIFTY April futures have shed over 4.05 lakh shares or 2.48% in Open Interest. This signifies reduction / unwinding of long positions in the Markets post the intraday highs. The NIFTY PCR stands at 1.06 as against 1.08.

Coming to pattern analysis, the Markets have been able to remain a notch above its 200-DMA which is 7865. However, as mentioned often in our previous editions, the Markets have not given a clear breakout on the Weekly Charts. Given the overall structure of the Daily Charts and if this is read along with the other lead indicators and the F&O data, the Markets are unlikely to give any runaway rise until it moves past 7950 levels. Until this happens it continues to remain vulnerable to selling pressures from higher levels.  In event of any corrective action, the level of 7865, which is the 200-DMA will continue to act as support if the Markets consolidates. However, if the Markets breaches the 200-DMA we will see some more weakness creeping into the Markets.

Overall, no major buying should be done until the Markets moves past 7950 levels. Until the Markets moves past this level, it is likely to consolidate with the level of 200-DMA acting as support. Buying  should be kept restricted and we continue to reiterate our advice of using up moves to protect profits and existing positions. Overall, cautious outlook is advised for today.

MARKET TREND FOR Thursday, April 21, 2016
We continue to keep our analysis for today on the similar lines that of yesterday. The Markets are likely to see a positive opening once again driven by liquidity and positive global markets. However, at the same time, the intraday trajectory would be important and the levels of 7950 will be important to watch out for. The Markets have shown a deteriorating Advance-Decline Ratio with increasing volumes and some potentially bearish formation on the Charts are hinting towards some distribution happening with every rise. 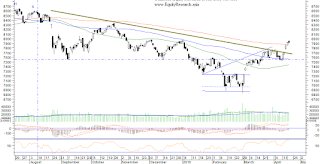 The RSI—Relative Strength Index on the Daily Chart is 67.7508 and it has reached its highest level in last 14-days which is bullish. However, it does not show any bullish or bearish divergence. The Daily MACD stands bullish as it trades above its signal line. However, on Candles once again, a hanging man-like candle has appeared. Though it does not satisfy a exact criteria of it being called a hanging man it certainly holds the potential to halt the up move at close levels, just like yesterday.

Coming to pattern analysis, the Markets have managed to keep its head above its 200-DMA which is 7868 today. In event of any correction, the Markets are likely to test this level at the first instance. At this juncture, we need to bear in mind that there has been no clear breakout on the Weekly Charts and as of today, we continue to resist to the 50-MA on the Weekly Charts. Having said this, given the overall structure of the Charts, with every rise, the Markets will make themselves more vulnerable to corrective activity at higher level.

Overall, it is also important to note that there has been net selling reported by both FIIs and DIIs, though in moderate quantities. It is also important that the up moves are more prone to corrective activity from higher levels if they occur with declining market breadth and increasing volumes as this signifies potential distribution at higher levels. We continue to reiterate our view on the Markets to use every up moves to book profits and protect positions at higher levels. The Markets are poised at a critical juncture today. We can fairly expect the Markets to open on a flat to modestly negative note and look for directions. Though the Markets have managed to end the day a notch above its 200-DMA, a clean break out still awaits the Markets on the Weekly Charts. Further, the structure of the Daily Chart clearly suggests good amount of possibility that the Markets will halt its up move at least for the immediate short term. With the intraday trajectory important, some amount of consolidation cannot be ruled out.

The RSI—Relative Strength Index on the Daily Chart is 67.7039 and it has reached its highest value in last 14-days which is bullish. It does not show any bullish or bearish divergence as such. The Daily MACD remains bullish as it trades above its signal line. On the Candles, however, a Hanging Man has occurred. Since this has occurred during an uptrend, it signifies as a reversal top. However, this needs confirmation.

On the derivative front, the NIFTY April futures have shed over 3.55 lakh shares or 2.19% in Open Interest. This clearly shows some reduction in the long positions. The NIFTY PCR stands at 1.07 as against 0.99.

Coming to pattern analysis, the Markets, on the Daily Charts, have managed to surge beyond its 200-DMA level which is 7870 today. However, it stays within its filter as of now. Further to this, on the Weekly Charts, the Markets have resisted to the 50-DMA which is 7927. Returning back to Daily Charts, the Markets have formed a potentially bearish candle. A hanging man usually signifies a reversal top and if the Markets moves past this level as well, then any uptrend would remain vulnerable to sharp correction. To the most likelihood, this is likely to halt the uptrend at least for the immediate short term. In case of any corrective activity, the Markets have supports that are much lower around 7700-7750 zones.

All and all, though the Markets have continued to display strength over last couple of days but some amount of consolidation or a mild correction cannot be ruled out.  Though the up moves have been fuelled by global strength and liquidity, the current formations on the Charts have become little bit risky. At this juncture, we would recommend not making further purchases and keeping them very limited and selective. It is strongly recommended to utilize any up moves in booking / protecting profits at higher levels. 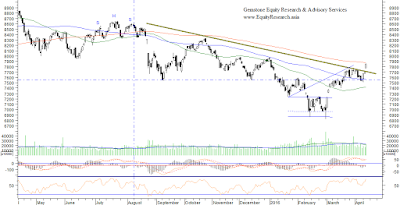 The Markets are expected today to open on a modestly negative note. It shall adjust itself to the global set up as it opens after two days of holidays followed by a weekend. Having said this, the Markets have a punctuated week again as tomorrow is once again a holiday on account of Mahavir Jayanti. The Markets will see itself trading in a ranged manner with a corrective bias as it has approached its 200-DMA after moving past the 7730-7760 zones.
For today, the level of 200-DMA, i.e. 7872 will act as immediate resistance level. The supports come in much lower at 7775 and 7750.

On the derivative front, the NIFTY April futures have added 13.45 lakh shares or 9.05% in Open Interest. This is a positive indication that fresh positions were seen added as the
Markets advanced while adding OI.

Coming to pattern analysis, the Markets resisted to the falling trend line resistance zone of 7730-7750 levels for couple of days before breaking upwards. The next logical target for the Markets was its 200-DMA which is 7872. The Markets have closed a notch below that and this level is expected to cause significant resistance to the Markets in immediate short term. If we take a look at the Weekly Charts, unlike Daily Charts, the Markets are yet to give any clear breakout from the very similar falling trend line drawn from 8600-levels. The Markets is yet to give a clear and clean break out on the Weekly Charts.

All and all, with the Markets having not yet given any clean break out on the Weekly Chart and with the 200-DMA in the close vicinity, it is likely to remain in corrective mode or see a range bound trade. Fresh positions to be taken only after the Markets moves past the 200-DMA and until that happens all up moves should be utilized to book and protect profits.