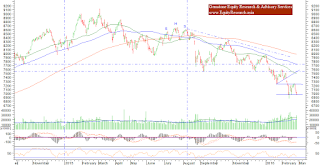 MARKET TREND FOR FRIDAY, February 26, 2016
Going strictly by numerical sense, the Markets had a fresh 52-week low on Closing Levels as it ended the day couple of points below its previous low. However, the Markets have attempted to take a support on the minor Double Bottom Formation. Today, we are likely to see a decently positive opening in the Markets and the Markets are expected to trade in positive at least in the initial trade. The Markets will also react to the Economic Survey coming out later today and the maintaining the possible positive opening would be important.
For today, the levels of 7034 and 7090 will act as immediate resistance levels for the Markets.  The supports come in at 6960 and 6870 levels.

The RSI—Relative Strength Index on the Daily Chart is 35.3237 and it does not show any failure swings. The NIFTY has made a fresh 14-day low but RSI has not yet and this is Bullish Divergence. The Daily MACD as reported a negative crossover and it now trades below its signal line.

On the derivative front, the March futures have begun with adding Open Interest of 44.91 lakh shares or 31.69%. The NIFTY PCR stands at 0.88.

Coming to pattern analysis, the Markets, as of yesterday have continued to remain in a broad trading range that it has formed between 6900 and 7240 levels. On the Closing charts, the Markets have attempted to take support on a minor double bottom formation and it is likely that it would validate that support. On the bar charts as well, though the intraday low remains lower, the Markets are within the overall broad range that is mentioned above. Having said this, today’s expected positive opening is likely to keep the Markets in that given broad range. It would be important to see that the Markets are able to maintain the expected positive gains. Any Close below the current close levels will increase the chances of the Markets testing its intraday 52-week lows.

Overall, the Markets continue to place themselves at a critical juncture wherein it is nearly mandatory to have a positive Close and keep itself in the broad trading range. Any loss at the Close levels will induce further temporary weakness in the Markets. With the current levels near its short term supports, we advise to refrain from creating any fresh shorts. Any longs, at the same time, should be protected at higher levels. Continuance of cautious outlook is advised for today. 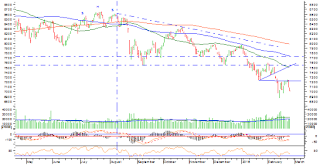 MARKET TREND FOR THURSDAY, FEBRUARY 25, 2016
Markets are likely to see a flat opening once again and look for directions. It poises itself at critical juncture as today remain a expiry day of current February series. At the same time, it faces three important events as well. Railway Budget comes up later in the day today, Economic Survey tomorrow and Union Budget on Monday. The technical structure shows throws mixed indications as though they wear a moderately bearish undertone, at the same time, they are unlikely to make fresh 52-week lows until there is some drastically wrong with Budget proposals.

The RSI—Relative Strength Index on the Daily Chart is 36.9588 and it remains neutral as it shows no bullish or bearish divergence or failure swings. The Daily MACD still remains bullish as it trades above its signal line.

Coming to pattern analysis, in lines with what we mentioned often in our previous editions, the Markets have reacted sharply from 7240 levels. These levels are now continuing to act as resistance as it was the support that the Markets breached on the downside. Having said this, the Markets are unlikely to breach the levels of 6869, the 52-week lows that it has formed couple of sessions back. The reasons are manifold. First, the volumes have declined; second, the PCR stands at one of the lowest levels in recent times indication of unwinding of decrease in overall Put positions. However, in event of three major events that the Markets face, the Markets are expected to hold 6869 levels as support on the downside unless something goes wrong drastically with the Union Budget proposals.

Overall, all is certainly not well with the Markets are the Markets have shown no signs of confirmation of any formation of the bottom so far. At the same time, a look solely at the technicals of the Markets suggests less possibilities of making fresh bottoms. However, at the same time good amount of volatility will remain ingrained in the Markets as the Markets will have a lot to reach to the events coming up in next three days. We continue to reiterate to refrain from any significant exposures and adopt highly cautious outlook on the Markets. 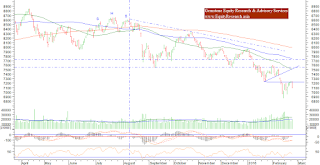 The RSI—Relative Strength Index on the Daily Chart is 40.22442 and it remains neutral as it shows no bullish or bearish divergence or any failure swings. The Daily MACD is bullish as it trades above its signal line.

As mentioned in our previous editions of the Daily Market Trend Guide, the Markets have been resisting multiple times to the levels of 7240. The primary reason being that this level is the support that the Markets breached while it formed its low of 6869. So, this level – 7240—will act as resistance while the Markets give a technical pullback. The pattern analysis very clearly suggests that though the bottom has been formed at 6869, as of now, this remains a near term bottom. However, in any case, the Markets have not confirmed any kind of reversal from these levels. In absence of any reversals and its confirmation, the Markets will continue to oscillate in a broad range as it has been doing in couple of previous sessions.

Overall, the Markets are also likely to remain ingrained with some amount of volatility as well. The expiry week as well as caution and adjustments before the Union Budget will add to the volatility that the Markets will witness. Also, with no bottom being formed, the oscillation in a broad range is also likely to remain somewhat volatile as well. Overall, we continue to reiterate to keep purchases limited and maintain adequate liquidity in the Markets while continuing with cautious outlook for the day. 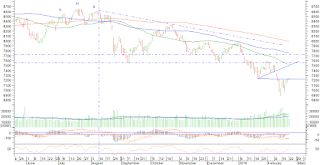 MARKET TREND FOR TUESDAY, February 23, 2016
Analysis for today continues to remain on similar lines that of yesterday. The Markets continued to resist to the levels of 7240 yesterday for nearly entire session. Today as well, we can fairly expect the Markets to open on a flat note and continue to consolidate in the initial trade while the levels of 7240 will continue to act as immediate resistance for the Markets.

The RSI—Relative Strength Index on the Daily Chart is 45.3427 and it remains neutral as it shows no bullish or bearish divergence or failure swings. The Daily MACD has turned bullish as it now trades above its signal line. We have mentioned in previous two editions about MACD moving towards positive crossover.

All and all, the Markets have been displaying strength and may move past the immediate resistance levels of 7240. It becomes important to note, however, that the Markets have shown some divergence from global markets while performing and even if its moves past 7240, it can test higher levels but will continue to remain in overall downward trajectory. It is advised to make selective purchases and use any up moves in protecting profits at higher levels. Positive optimism is advised for today.