MARKET TREND FOR FRIDAY, JUNE 17, 2016
Markets recovered over 50-odd points yesterday from the low point of the from a minor support pattern created over past few days. Today, aided by a positive surprise on the CAD figures and equally aided by favorable technical factors, the Markets are likely to see a decently positive opening today. Today’s likely positive opening will see the Markets opening  towards the higher end of the trading range formed over previous sessions and it would be important to see if the Markets sustain expected opening gains and if they capitalise on it. 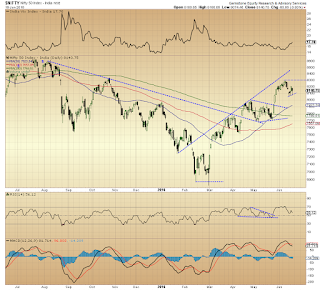 The RSI—Relative Strength Index on the Daily Chart is 56.1196 and it remains neutral as it shows no bullish or bearish divergence or any failure swings. The Daily MACD stays bearish as it continues to trade above its signal line. On Candles, a hammer-like candle has occurred. Though it does not constitute a exact hammer (going by measurements, strictly), it does potentially suggest that the temporary downsides may be over.

On the derivative front, NIFTY June futures have shed over over 15.12 lakh shares or 8.15% in Open Interest. This very clearly signifies sharp short covering from lower levels and de-risking of positions. The NIFTY PCR stands once again at 1.09 as against 1.14.

If we have a look at pattern analysis, the Markets currently remain intact in a primary up trend as it trades above all of its moving averages. Having said this, after breaking out on the upside from a triangle formation, the formed a immediate top at 8290-8300 levels. After this, as evident from the Charts, it has been consolidating. Even if we see some downsides, but trade above 50-DMA, it would be perfectly healthy for the Markets. However, short term pattern supports in between this exists at 8050-8070 levels. It would be important to see the Markets trading above these levels to avoid even short term weakness.

All and all, as mentioned, the overall structures of the Markets remain intact. It is, therefore, advice to refrain from creating any short positions and short squeeze might keep occurring at lower levels.  On the contrary, any short term weakness should be continued to be utilized to make very selective purchases. Until the Markets move past 8300 levels, profits should be vigilantly protected at higher levels. The Markets are expected to remain in a broad range with volatility remaining ingrained in it.

MARKET TREND FOR THURSDAY, JUNE 16, 2016
The Markets saw a massive bout of short covering from lower levels yesterday and filled up the gap it had created three days back. Speaking purely on technical terms, the Markets should open on a flat note and possibly continue with its up move. However, given the Global Markets, there are chances that the Indian Markets may open slightly on a lower note and remain once again under some range bound consolidation. The levels of 8060 will continue to act as support in the immediate short term. 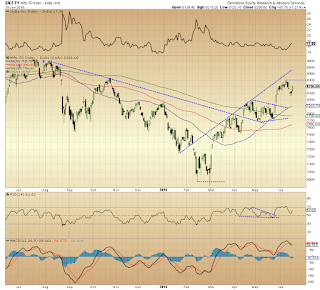 The RSI—Relative Strength Index on the Daily Chart is 62.0187 and it remains neutral as it shows no bullish or bearish divergence or any failure swing. The Daily MACD still continues to remain bearish as it trades below its signal line.

On the derivative front, the NIFTY June futures have shed yet another over 5.39 lakh shares or 2.82% in Open Interest. This very clearly signifies short covering from lower levels. The NIFTY PCR stands now at 1.14 as against 1.09.

While having a look at pattern analysis, it becomes evident that the Markets have seen 8050-8060 zone as its immediate support. On the same lines, the level of 8295-8300 has now become an immediate top as well. We will not see any sustainable rise until the Markets move past the 8300-mark. In coming days, the Brexit will continue to cast its shadow over possibility of any such up move. Also, in the same breath, any move below 8050-8060 will trigger some more short term weakness. Until the Markets take a directional view, we will continue to see the Markets remain range bound and in the consolidation mode.

Overall, today as well, we will once again see the Markets opening modestly on a lower note but may remain in consolidation mode and up moves from lower levels cannot be ruled out. With no structural breach on the Charts, shorts should be strictly avoided all dips should be utilized to make fresh selective purchases. Profits too should be protected at higher levels as good amount of volatility too would remain ingrained in the Markets.

MARKET TREND FOR WEDNESDAY, JUNE 15, 2016
Expect the Markets to open on a modestly positive note and look for directions and attempt and find some stability. The Markets have traded precisely on analyzed lines yesterday and the levels of 8050-8060 have held out as support twice. These levels would be again critically important to watch out for and it would be important for the Markets to maintain themselves above these levels. If the Markets breach these levels, then the possibility of it testing its 50-DMA would increase. 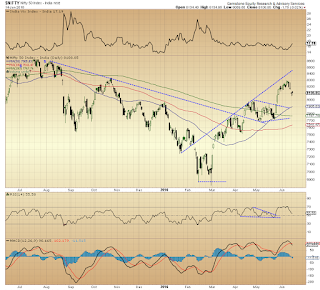 The RSI—Relative Strength Index on the Daily Chart is 55.5830 and it has reached its lowest value in last 14-days which is bearish. RSI has set a fresh 14-period low while NIFTY has not yet and this is Bearish Divergence. The Daily MACD remains bearish as it trades below its signal line.

While having a look at pattern analysis, the Markets have been consolidating post forming high of 8294. However, while doing so, it has created a gap between 8162-8070 levels. This zone is likely to act as some minor resistance when the Markets try to pull back. However, having said this, it is important to note that the Markets have attempted to take support twice at 8050-8060 levels and therefore, these levels become very important short term support. It would be critically important for the Markets to trade above this level and breach on the downside will see some more weakness creeping in. If this happens, then the possibility of the Markets testing its 50-DMA cannot be ruled out.

All and all, the Markets continue to remain in consolidation mode and this continues to keep our analysis on similar lines as that of yesterday. The Markets are likely to remain range bound with some amount of volatility remaining ingrained in it. The levels of 8050 should be watched out for and until then all downsides should be utilized to make selective purchases.

MARKET TREND FOR TUESDAY, JUNE 14, 2016
While trading very much on expected lines, the Markets yesterday recovered some 50-odd points from the low point of the day but still ended the day with losses. Today, we can once again expect the Markets to open on a modestly negative note and look for directions but the yesterday’s low level of 8063 is likely to hold as support. Though the Markets are expected to continue to remain in corrective mode, it is more likely to remain range bound as well. 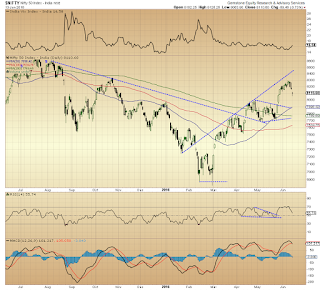 The RSI—Relative Strength Index on the Daily Chart is 55.7400 and it has just reached its lowest value in last 14-days which is bearish. The RSI has set a fresh 14-period low while NIFTY has not yet and this is bearish divergence. The MACD too has reported a negative crossover and it is now bearish as it trades below its signal line. On the Candles,  a falling window (gap) has occurred. This occurring with the previous two candles also being black, makes charts little weaker.

Coming to pattern analysis, the Markets are now showing signs of correction after a stupendous 450+ points of up move. After making an immediate top at 8294, the Markets have shown some corrective tendency. If we draw a trend line from the lows it made in February, the Markets may see some 50-100-odd points of modest downsides left before it attempts of find foot again. With this, the levels of 8000 may be important to watch out for. If the current levels are breached, then the Markets testing the 50-DMA cannot be ruled out.

Overall, in the scenario described above, in any case, there will be no structural breach on the Charts even if the Markets tests its critical supports mentioned above. It would be a healthy correction and most of the dips will be bought into. We continue to reiterate to use all upsides until the levels of 8294 to book and protect current profits. Shorts should be avoided but as the Markets are likely to continue to see a range bound consolidation and movements.

MARKET TREND FOR MONDAY, JUNE 13, 2016
Markets swung nearly 80-odd points either side on Friday or ended the day with modest losses. Today, we can expect the Markets to open once again on a lower note. News factors like weak IIP numbers, terror attack in the US, etc., can weigh on the Markets but speaking purely on technical grounds, the Markets are currently under healthy mode of correction and this corrective mode is likely to persist today as well. 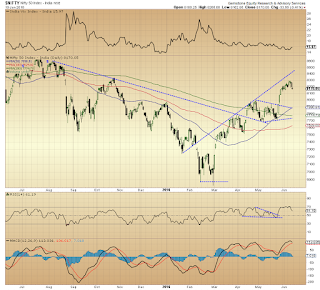 On the derivative front, the NIFTY June futures have shed 21,000 shares or nominal 0.10% in Open Interest. This has kept OI virtually unchanged and we can fairly say that that has been no major selling  / unwinding of positions that was visible on Friday.

Coming to pattern analysis, the Markets have started to show some signs of weariness after its sharp up move of over 400-odd points after breaking out of a triangle formation.  So far as current behavior of the Markets is concerned, it has been consolidating after forming a immediate top at 8294 levels. The current consolidation that the Market is witnessing has been in fact healthy for the Markets after the kind of rise that it has witnessed. Today, with the type of gap down opening that is expected, the Markets may test its immediate support levels and see some stability returning from lower levels.

Overall, there are very high chances that the dips get bought into and therefore the Markets see some buying emerging from lower levels. It is advised to use such dips to accumulate quality stocks and therefore selective purchases may be made at lower levels.  Overall, though the Markets may remain volatile as it expects lots of news flow this month buy any structural breach on the Charts is not likely. Cautious outlook is advised for today.