MARKET TREND FOR TUESDAY, MARCH 14, 2017
Today, the Markets shall open after an extended weekend as Monday was a trading holiday on account of Holi. The Weekend, however, was extremely eventful and today, we see a imminent gap-up opening in the Indian Equities as NIFTY shall very buoyantly react to the UP Election outcome on Saturday wherein the BJP made a clean sweep achieving absolutely majority. We had often mentioned number of times in the previous notes that the NIFTY has been consolidating with an upward inclination and bias. It had not only digested the near-imminent US Interest rate hike this March but instead prepared itself for an upward breakout at an appropriate time. Today, NIFTY will see a gap up opening taking cues from the election outcome. This election outcome gifting the ruling party an absolute majority will give a huge impetus to the reforms as it will positively alter the equations in the Upper House and make passage of important bills much easier. We will see NIFTY giving a thumbs-up to this and make a long expected and awaited very decisive breakout scaling fresh lifetime highs. 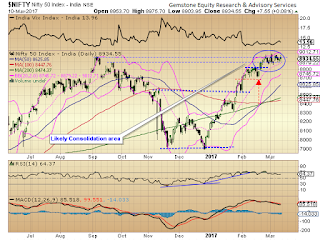 Speaking purely on technical grounds, the levels of 9065 and 9120 will act as immediate resistance levels for today. However, the highs that the NIFTY may form may go beyond these mentioned levels.

The Relative Strength Index – RSI on the Daily Chart is 64.3720 and this remains neutral showing no bullish or bearish divergence or failure swings. The Daily MACD still continue to remain bearish while trading above its signal line. No significant major formation is observed on Candles.

The NIFTY March futures had ended the day adding yet another 5.96 lakh shares or 2.62% and it had continued to show bullish build up in the NIFTY.

The pattern analysis now shows two things very clearly. The Circled area on the Charts was the likely area wherein the Markets were expected to consolidate. As evident from the Charts, it did consolidate in the marked area while showing upward bias. The area was a major Double Top Resistance area on the Daily Charts and any upward breach would have meant a decisive breakout for the NIFTY. Today, with a big gap up opening expected, the NIFTY will, in all likelihood, achieve this decisive breakout.

All and all, beyond all usual analysis, a gap up opening is imminent and we will see the session remaining range bound post gap up opening. Any serious profit booking at higher levels is not expected to soon and we might see the NIFTY trending in sideways trajectory post all-likely gap up opening. Importantly, all the sectors getting positively affected by the pending bills and contributing to faster reforms will be chased in frenzied manner. Overall, we advice to book any profit that is significant and make fresh allocation to sectors expected to gain directly from the development that happened over the weekend. Effective sector rotation is advised.

WEEKLY MARKET OUTLOOK FOR MARCH 13 THRU MARCH 17, 2017
As it was expected in our previous Weekly Technical Note, the benchmark NIFTY50 continued to consolidate and ended the Week with modest gains of 37 points or 0.42% on a Weekly note. In the Week that has gone by, the Markets consolidated on a cautious note with positive bias as it would face the results of the Assembly polls that also include all important UP and Uttarakhand polls. The results are important because a win for BJP would not only be a precursor to th 2019 elections, but the present win could also very favorably alter the equations in the Upper House which would subsequently make passage of some critically important bills easy. On a lighter note, the exit polls seem to be wrong on the positive side. It had predicted lead for BJP but BJP seems to be doing in fact much better than expected. If there are no last minute upsets, BJP is to come out much stronger and this is likely to be sentimental booster for the Markets. For Monday, we expect a strong opening and also expect the Markets to begin a move which will be a decisive move towards 9000-mark and a fresh breakout subsequently. 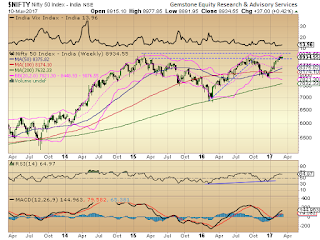 The Relative Strength Index – RSI on the Weekly Chart is 64.9845 and it remains neutral showing no bullish or bearish divergence or any failure swings. The Weekly MACD is bullish as it continues to trade above its signal line. On the Candles, a Spinning Top  has occurred and this indicated a caution and indecisiveness on part of participants.

While having a look at pattern analysis, it is evident that the NIFTY has been consolidating near current levels for the third week in a row. These levels of 8930-8960 zones are not only Triple Top pattern resistance but it is also part of a very Complex Inverse Head & Shoulder Pattern”. Any breach above 8960 at Close levels and beyod will see the Markets making a decisive up move towards a fresh breakout.

All and all, currently we are likely to see a strong opening on back of BJP’s outcome in the elections. This will be more due to its effect on the forthcoming 2019 elections and more importantly to the improved equations in the  Rajya Sabha which will go a long way in helping clear some critically imporant bills. Returning to a technically important point, it remains important to note that for a fresh sustainable up move to occur, NIFTY will have to Close above 8960 mark comprehensively and move on. We expect a upward momentum to continue and expect a decisive move by NIFTY in the coming days. 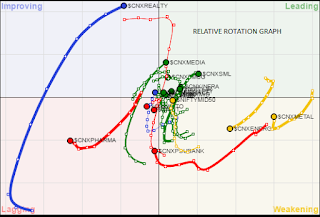 A study of Relative Rotation Graphs – RRG clearly that while NIFTY50 is on the verge of making a decisive move, any upside will have wider and broad participation. In the coming week, we are expecting outperformance from BANKNIFTY, Financial Services and Media Stocks. We also expect the select stocks from broad Index like NIFTYFR, NIFTY MIDCAP100 & 500 and INFRA Stocks. We expect PSU Banks to further relatively improve its performance and it is expected that stocks like SBIN and PNB will lead this movement. Some relative under performance is expected to come in from ENERGY and Metals and Pharma packs. IT pack is expected to remain subdued and may get weaker on week-on-week basis.