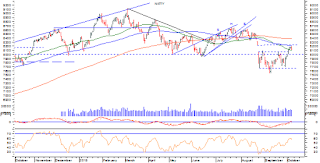 MARKET TREND FOR FRIDAY, OCTOBER 09, 2015
The Markets are likely to remain in corrective mode today as well and there are chances that we may see one more day of consolidation on the Charts. The Markets are expected to open on a relative quiet mode but the levels of 50-DMA would be important to watch out for. It would be important for the Markets to maintain itself above these levels failing which it is likely to test its important pattern support.

The RSI—Relative Strength Index on the Daily Chart is 57.6893 and it remains neutral as it shows no bullish or bearish divergence or any failure swings. The Daily MACD continues to remain bullish as it trades above its signal line. On the Candles, an Engulfing Bearish Pattern has occurred. Since this pattern has occurred after an up move, it is likely temporarily pause this up move and cause the Markets to consolidate.

On the derivative front, the NIFTY October futures have shed nominal 3875 shares or 0.02% in Open Interest. With total OI remaining nearly unchanged, it continues to portray underlying resilient undertone in the Markets.

Coming to pattern analysis, the Markets are continuing to consolidate for the second day as well after rising nearly 450-odd points in six straight sessions. It is currently trades below its 100-DMA and above its 50-DMA. In event of any consolidation continuing to consolidate, the level of 50-DMA is expected to act as support. If the Markets breach this level, then it may test its important pattern support of 8060 levels but it seems less likely.

All and all, the Markets are likely to continue to consolidate, at least in the initial trade. However, even if it sees some more downsides, it comfortably trades above its important pattern supports. Further, the F&O data indicates underlying buoyancy and there are chances that the Markets attempts to resume its up move. Any consolidation / correction should be utilized to make fresh purchases. While keeping purchases selective, shorts should be avoided and cautiously positive outlook is advised for the day. 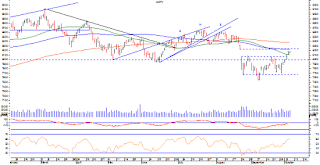 MARKET TREND FOR THURSDAY, OCTOBER 08, 2015
Today’s analysis continue to remain on similar lines that of yesterday as the  Markets are once again likely to open on a flat note and consolidate as the day advances. With the opening expected flat, the Markets will continue to resist around mentioned levels and the intraday trajectory it forms would be critical to decide the trend for today. Over 450-odd points of rise in last seven straight session continues to keep the Market vulnerable to some range bound consolidation or minor profit taking bouts at higher levels.

The RSI—Relative Strength Index on the Daily Chart is 60.6534 and it has reached its highest value in last 14-days which is bullish. It does not show any bullish or bearish divergence. The Daily MACD remains bullish as it trades above its signal line.

On derivative front, the NIFTY has gone on to add yet another over 8.89 lakh shares or 4.38% in Open Interest. This very clearly indicates the bullish undertone and it is likely to keep the Markets restricted to just consolidation than any major profit taking. The NIFTY PCR stands at 1.03 as against 0.99.

Coming to pattern analysis, as mentioned in our yesterday’s edition, the Markets have managed to move past its important resistance zone of 7960-8000 levels and 8060. In event of any consolidation or minor profit taking bouts, these levels, which were resistance earlier, are not expected to act as support. On the upper side, the levels of 8240 would be important to watch out for as it is yet another important pattern resistance. Until the Markets moves past it, we will continue to witness ranged consolidation and minor profit taking bouts at higher levels.

Overall, the Markets are likely to consolidate as it is expected to open on a flat note. The Markets would also remain vulnerable to minor profit taking bouts from higher levels but at the same time, the undertone continue to remain evidently buoyant. So, any consolidation is likely to remain limited to range bound movement and no major correction should be seen. While keeping this in view, while protecting profits at higher levels, we continue to reiterate to make selective purchases as well. MARKET TREND FOR WEDNESDAY, OCTOBER 07, 2015
Markets are likely to see some consolidation today. We are likely to see the Markets opening on a flat note and look for directions. It is important to note that the Markets have advanced over 490-odd points in last five sessions and therefore it cannot be ruled out that it might see itself consolidating at higher levels. It is also important to note that the Markets are approaching its another pattern resistance as well.

The RSI—Relative Strength Index on the Daily Chart is 59.6723 and it has reached its highest value in last 14-days which is bullish. It does not show any bullish or bearish divergence on the Chart. The Daily MACD remains bullish as it trades above its signal line.

Coming to derivative front, the NIFTY October series have shed a 17,750 shares or nominal 0.09% in Open Interest. The OI, practically remains unchanged, and therefore we can safely assume continuation of bullish undertone in the Markets. The NIFTY PCR stands at 0.99 as against 0.97.

Coming to pattern analysis, the Markets have broken out of the broad trading range as mentioned often in our previous editions of Daily Market Trend Guide. While doing so, it has moved past its key resistance levels of 7960-8000 zone and also 8060 levels. It now trades above its 50-DMA and in event of any consolidation, it is likely to test supports of its 50-DMA levels. In event of some consolidation persisting, it is likely to test its supports of 8060 levels. This is because this is the level which was as resistance earlier and is now expected to act as support in event of any consolidation.

All and all, given the technical structure of the Markets and also given the fact that it is risen some 490-odd points in last five sessions, it is very much likely that it sees some selling pressure and minor profit taking at higher levels. Any up moves should be now utilized to protect existing profits. Dips should also be used to make modest purchases while remaining extremely selective. Cautious optimism is advised for today. 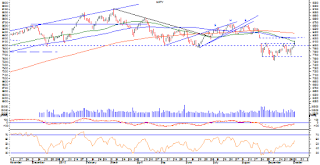 MARKET TREND FOR TUESDAY, October 6, 2015
The Markets are set for a decently positive opening once again as and have attempted a serious trend reversal attempt. Expect the Markets to open on a strong note and continue with its yesterday’s up move. The Markets have halted their up move at its 50-DMA and today, with its opening above it, this level is likely to act as support if the Markets close above this level. More importantly, the 7960-800 zone and the levels of 8061 will not act as major pattern support in future.

The RSI—Relative Strength Index on the Daily Chart is 58.3498 and it has reached its highest value in last 14-days which is bullish. The Daily MACD remains bullish as it trades above its signal line.

On the derivative front, the NIFTY October futures have 12.44 lakh shares or 6.52% in Open Interest. This is a very strong indication of the overall long and bullish bias of the participants. The NIFTY PCR stands at 0.94 today.

While having a look at pattern analysis, post the lows formed in the first week of September, the Markets were trading in a broad trading range in a rectangle. Having said this, the levels of 7960-8000 range and further at 8061 were one of the major pattern resistances on the Daily Charts. The reason was that the former was the major support that the Markets broke on the downside and the later was the “gap” that the Markets created while opening on a gap down in September first week. Further to this, in yesterdays up move, the Markets have managed to move past this level in a decisive move and in future, in any event of consolidation or correction, these levels are expected to act as important pattern support. The Markets currently have halted at its 50-DMA but with today’s expected higher opening, it is likely to fill up gap and move towards meet its another pattern resistance at 8235 levels.

Overall, the Markets are poised for a continuation of up move and it is likely to fill up the gap that it has created and is likely to approach another major pattern resistance level of 8235. The Markets is likely to see some consolidation or minor profit taking at higher levels. So, in the event of the Markets approaching 8200 levels, it is advised to continue to lay emphasis on protecting profits at higher levels. Purchases may be made on any dips on very selective basis as sectoral out performance would continue.