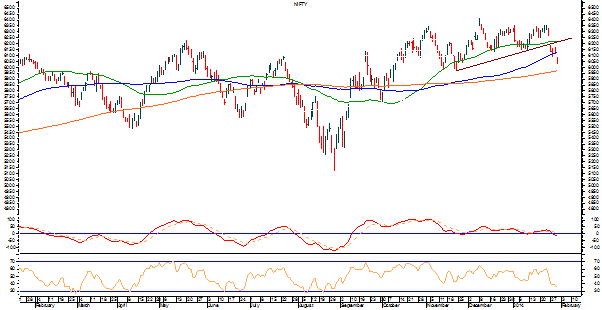 Today, expect a flat opening in the Markets, and at least in the initial trade, we can hope to see some respite from the weakness that we have been witnessing over last week.  The Markets have breached its 100-DMA at close levels and these levels will act as resistance on its way up. This will see the Markets consolidating before attempting a sustainable up move. Given the lead indicators, the downside remains limited.

The RSI—Relative Strength Index on the Daily Chart is 35.5210 and it has reached its lowest value in last 14-days which is bearish. However, today as well, it does not show any bullish or bearish divergences. The Daily MACD continues to trade below its signal line.

On the derivative front, NIFTY February futures have added over 17.49 lakh shares or 12.32% shares in Open Interest. The F&O data continue to show that significant amount of shorts still exist in the system.

Given the pattern analysis of the Chart, the NIFTY has breached its 100-DMA at the Close levels. Technically speaking, this is a bearish formation and has given a sell signal. However, the reading still remains on similar lines that of yesterday t hat any weakness extending would take the Markets near the “oversold” levels and therefore there are very high chances that the Markets sees a sharp pullback.  The main reason behind this is the data that shows that the FIIs have been shorting heavily in the derivative segment while selling in Cash segment. 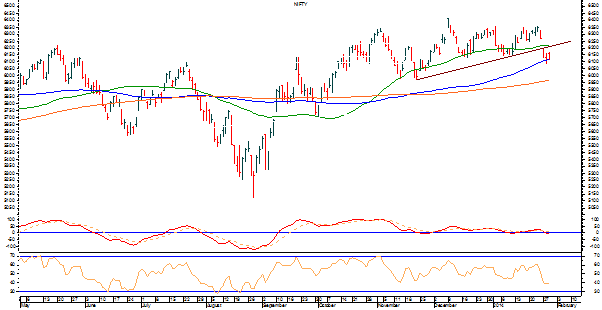 Today’s session is likely to be like a acid-test for the Markets. The Markets have taken support at its 100-DMA at Close levels. However, US tapering of $10 billion will take its toll on opening and the Markets are set to open lower. The key point is to see if the y recover later in the day today or tomorrow as any expected gap down opening with make the markets “oversold”.

For today, the levels of 6170 would act as resistance while supports exist at 6120 levels at Close levels and at 6030 levels intraday.

The RSI—Relative Strength Index on the Daily Chart is 38.8366 and it has reached its lowest value in last 14-days which is bearish. It does not show any bullish or bearish divergences as such. The Daily MACD remains bearish as it continues to trade below its signal line.

Having said this, today’s session is set to be a difficult one for the Markets. On one hand, it is all set and likely to breach the key support of 100-DMA and at the same time, if sees a deeper cut, it would immediately get “oversold”. It would be critically important to see if the Markets recover in the second half of in new series beginning tomorrow.

From what is seen from the pattern analysis and the key F&O data, the Markets will not see a serious breach beyond today’s gap down opening. It is strongly advised to cover profits in any existing short positions. However, it is also advised to avoid any aggressive buying as well. Fresh shorts should not be make as it can lead to short trap in coming days. While remaining light on positions, maintaining liquidity for existing positions with cautious outlook is advised for today. 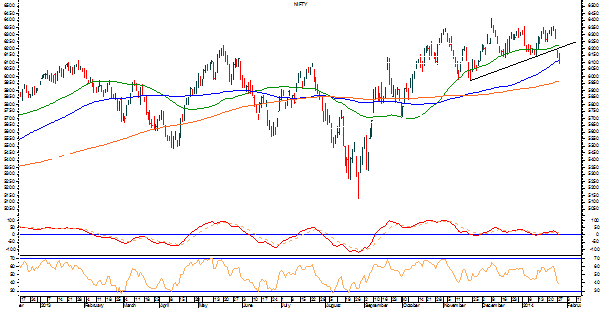 The levels of 100-DMA has stood out as support at Close levels and today, we are expected to see some respite from the weakness that we have been seeing. The markets are expected to open on a modestly positive note and look for directions. As evident from the Charts, the Markets have broken support of a trend line and its 50-DMA and therefore it would be critically important for the Markets to move past that levels to resume its up move.

The RSI—Relative Strength Index on the Daily Chart is 39.2754 and it has reached its lowest value in last 14-days which is bearish. It does not show any bullish or bearish divergence.  The Daily MACD trades below its signal line.

The pattern analysis shows the Markets breaching the levels of 50-DMA and a rising trend line which coincides as a same levels around 6200-6215. It would be therefore very important for the Markets to move back above these levels for resuming a sustainable up move. So long as it rules below these levels it will have a looming danger of consolidation and some further correction. However, positively speaking, the levels of 100-DMA have stood out as support at Close levels.

All and all, the Markets will find resistance near the 6200-6215 levels while the levels of 100-DMA acting as supports. It is advised to continue to remain light on the positions while maintaining liquidity and making very selective, few purchases and protecting existing profits at higher levels. The directional consensus still lacks however, the room for improvement remains strong and intact. Overall, cautious optimism is advised for today.

We have not been able to come out with edition of Daily Market Trend Guide in regular PDF Format. However, the section "Market Trend For Today" has been reproduced in text format below. Inconvenience is sincerely regretted.

MARKET TREND FOR TODAY
It is today, that the RBI is slated to come up with Credit Policy and the Markets are again set to react to it today. After losing over 200-odd points in last two trading sessions, the Markets are again slated to open on a quiet note and look for directions. The Markets are likely to see a quiet opening and a range bound trade in the morning and would react to the RBI Announcements later on. RBI is expected to leave the key rates unchanged.

The Markets have breached the 50-DMA and therefore, the levels of 6106, which is the 100-DMA is likely to get tested and act as support. The resistance on the upside would be 6218 and 6280 levels. It would be very important for the Markets to move past the 50-DMA to avoid any structural weakness.

The RSI--Relative Strength Index on the Daily Chart is 39.9499 and it has reached its lowest value in last 14-days which is bearish. It, however, does not show any bullish or bearish divergences. The Daily MACD too, due to the sharp fall in two days, has reported a negative crossover and now trades below its  signal line.

Going purely by the Charts, the Markets have breached the levels of 6218, which is the 50-DMA and this would act as resistance on the way up. It would be, therefore, very much imperative for the Markets to rise and move past that levels again in order to avoid any structural breach. On the way down, today's opening is likely to test the 100-DMA, which is 6106 and the Markets are very much likely to take support around those levels.

All and all, it is very much likely that we see a quiet opening in the beginning and a range bound trade but there are equally good chances that the Markets improves as we go ahead in the session. With RBI likely to keep the key rates unchanged any smallest trigger would see the Markets improving after taking initial support. Overall, while avoiding any major fresh positions, maintenance of liquidity and cautious outlook is advised for today.
Milan Vaishnav,
Consulting Technical Analyst,
www.MyMoneyPlant.co.in
http://milan-vaishnav.blogspot.com
+91-98250-16331
milanvaishnav@mymoneyplant.co.in
milanvaishnav@yahoo.com
Posted by MyMoneyPlant.co.in at 1/28/2014 08:52:00 AM No comments: 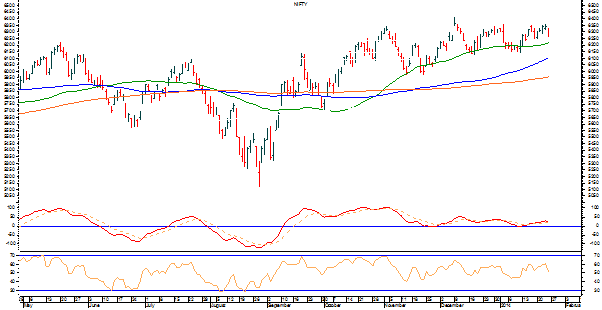 Beginning today, we have expiry coming this Thursday. More importantly, RBI shall come up later today with the Credit Policy and apart form this domestic event, there is two-day  FOMC meet beginning tomorrow and fear of tapering would weigh on the Markets. Given all this, we are likely to see a gap down opening today, however, the 50-DMA levels of the Markets would come again into play and it would be critically important to observe the behaviour of the Markets around these levels.

Going by the over all pattern analysis, today, the Markets are likely to test the 50-DMA once again, and given this scenario, if the Markets closed below the 50-DMA OR its filters it may bring in temporary weakness. However, if we read this along with the lead indicators, there are chances that the Markets finds its support near the 50-DMA or little below that within its filters and recovers from that. Given these fair chances, we may see selective stock picking happening from lower lowers and the Markets do not report a structural breach on the Daily Charts.

Overall above that is mentioned above, the Markets would also see itself reacting to the RBI Credit Policy and it is expected to do so after trading in a range in the morning trade. Given all this, it is highly recommended the once should still continue to refrain from shorts until the Markets breaches the critical support at close levels. Until this happens, we would continue to see selective stock buying from lower levels. Overall, while remaining light on positions and maintaining adequate liquidity, very selective stock picking may be done at lower levels.