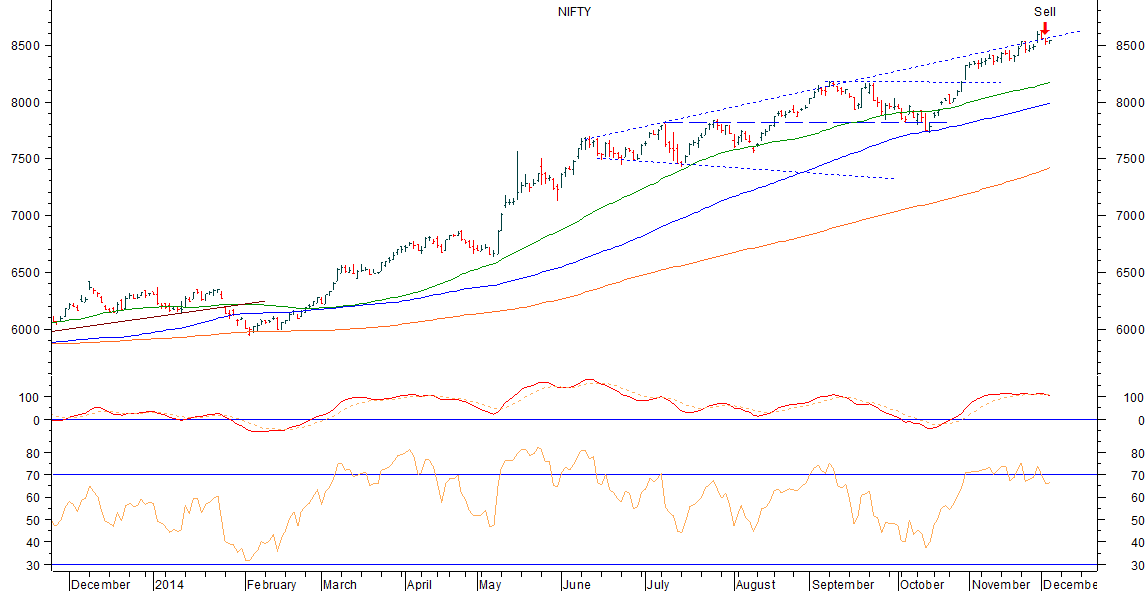 The Markets are not completely out of the woods as yet and they continue to trade below the pattern resistance levels on the Daily Charts. We are expected to see modestly negative opening once again and there are technical chances of the Markets seeing some weakness for the immediate short term. In case of up moves, the levels of 8550-8575 zone would continue to pose resistance to the Markets.

The RSI—Relative Strength Index on the Daily Chart is 66.6763 and it remains neutral as it shows no bullish or bearish divergence or any failure swing. The Daily MACD is bearish as it now trades below its signal line.

On the derivative front, NIFTY December futures have shed further 8.78 lakh shares or 4.11% in open interest. This continue to show that there has been consistent unwinding of long positions in the Markets.

Overall, speaking purely on technical ground, the Markets are prone to some short term correction. Pattern analysis show clear possibility of this and the F&O data second this reading. Given this technical condition of the Markets, it is strongly recommended to refrain from aggressive purchases. While remaining exposed to only select defensive stocks, liquidity should be maintained. Tight vigil over existing profits along with cautious outlook is advised for the day. 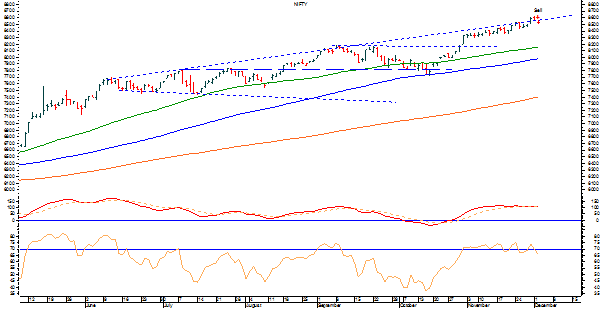 Markets will have a critical session on Wednesday. Expect the Markets to once again open on a modestly negative note and continue with its corrective activities. In our previous edition, we had mentioned that any dip below 8540 levels would induce some weakness. Since the Markets have closed below this levels, it will see some more weakness if it continues to trade below this level. If the Markets move past this level again, it would put itself once again in consolidation stage.

The RSI—Relative Strength Index on the Daily Chart is 65.8757 and it has reached its lowest value in last 14-days which is bearish. The RSI has formed a fresh 14-period low whereas NIFTY has not yet and this is Bearish Divergence.  The Daily MACD has reported a negative crossover and it is now bearish as it trades below its signal line.

On the derivative front, the NIFTY December futures have shed over 5.50 lakh shares or 2.51% in Open Interest. This clearly signifies that there has been shedding  / unwinding of positions at higher levels from the Markets.

Overall, we will continue to see corrective activities in the Markets in the immediate short term. In event of any up moves we would also see some volatility creeping in which can result into intermittent profit taking bouts. It is continued to be advised to refrain from blanket purchases and keep overall exposure in the Markets curtailed. While going long with very selective purchases, overall, liquidity with cautious approach is advised for the day. 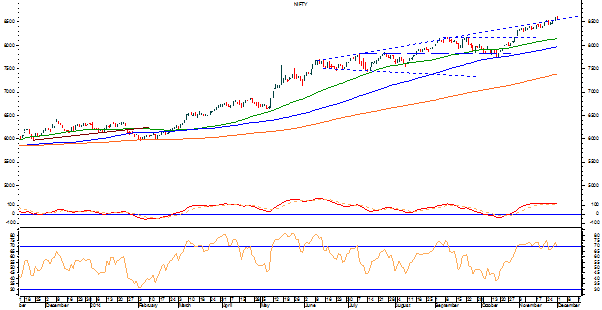 The Markets continue to remain at critical juncture. We can expect a flat opening tomorrow and may trade in a capped range ahead of RBI Announcements and react to it after that. As such no rate cuts are expected but it would be technically important for the Markets to trade above 8540 levels. If it dips below this, it may induce some short term weakness in the Markets.

The RSI—Relative Strength Index on the Daily Chart is 69.6175. It has moved below from topping formation and this is bearish. It otherwise remains neutral with no failure swings or any bullish or bearish divergence. The Daily MACD continues to trade above it signal line.

On the derivative front, the NIFTY December futures have shed over 2.69 lakh shares or 1.21% in Open Interest. This signifies some unwinding of long positions from higher levels.
Going by the pattern analysis, the Markets have taken a very immediate support on the rising trend line that it attempted to break on the upside. However, any dip below the levels of 8540 is likely to induce some immediate weakness in the Markets. The lead indicators, read along with F&O data show some tilt towards this situation.

Overall, we continue to reiterate caution in the Markets. Given the current state of Technical Charts, its lead indicators, derivative data, it would be absolutely wise to concentrate on protecting current profits. While keeping purchases very limited and highly selective, liquidity should be maintained as selling bouts and minor but sharp cannot be ruled out even if we have the overall trend intact. 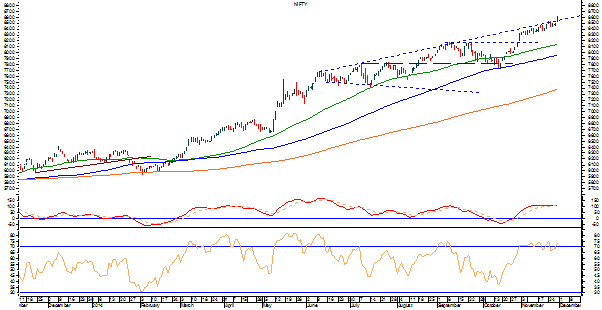 The Markets have once again attempted a breakout on the upside but not trade overbought again. Expect the Markets to open on a quiet note and also expect it to trade mildly positive in the initial trade. However, given the technical structure, some amount of profit taking from higher levels just cannot be ruled out as the current up move is fuelled by liquidity.

The RSI—Relative Strength Index on the Daily Chart is 73.6449 and it shows no failure swing. However, it trades in “overbought” area and also shows Bearish Divergence as the RSI has not posted a fresh 14-period high whereas the NIFTY has. The Daily MACD trades bullish above its signal line. On the Weekly Charts, the Weekly RSI is 74.9885. It is bullish as it has reached its highest value but it also trades in “overbought” area. The Weekly MACD is bullish but this too now is “overbought”.

On the derivative front, the NIFTY December futures have added yet another over 12.75 lakh shares or 6.09% in Open Interest. This clearly shows that there has been addition of fresh longs in the system .

Given this technical reading, there are strong chances that we might see intermittent selling bouts even if the Markets continue to remain fuelled by liquidity. It would be of extreme importance that one keeps protecting profits at higher levels. Up moves, with this structure of the Charts, cannot be taken for granted and therefore fresh positions should be taken with extremely caution and on highly selective basis.