MARKET TREND FOR THURSDAY, MAY 12, 2016
The Markets survived a Mauritian Treaty scare as it traded precisely on expected lines. Post gap down opening, at one point of time, it recovered its losses entirely and ended with modest losses. Today, we can expect the Markets to open on a flat to modestly negative note and look for direction. The Markets are expected to remain under consolidation with 200-DMA acting as support and this would be purely on technical grounds. 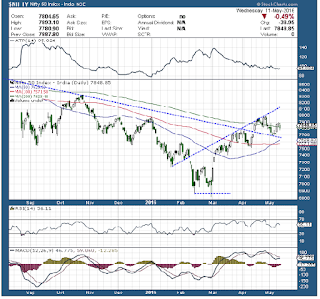 The RSI – Relative Strength Index on the Daily Chart is 56.11 and it continues to remain neutral without showing any bullish or bearish divergence or any failure swings. The Daily MACD stays bearish as it trades below its signal line. However, it is moving towards reporting a positive crossover.

On the derivative front, the NIFTY May futures have shed over 17.63 lakh shares or 9.54% in Open Interest. This figure is significant by any means and it shows heavy short covering from lower levels. The NIFTY PCR stands at 0.92, unchanged from its previous levels.

While having a look at Pattern Analysis, the Markets have its intermediate top / resistance levels at 7970-7990 zones. Unless that is cleared, we are not likely to see any sustainable fresh rally on the upside. However, even without this breakout, the overall trading range of the Markets remains much wide and this will see the Markets moving in a large band with the levels of 200-DMA acting as support and the levels of 7970-7990 acting as resistance. This translates into trading range of nearly 170-odd points and this means that will also see quite good amount of volatility remaining ingrained in it.

The Markets shall also react to the YOY Inflation rate and March IIP numbers coming in later today. The Markets will also react to that in coming sessions as well. Today, we can see the Markets moving in a capped range and we will witness the stock specific out-performance and very select purchases taking place. While avoiding shorts, such selective purchases may be made while remaining vigilant enough to protect profits at higher levels.