MARKET TREND FOR TUESDAY, MAY 10, 2016
Markets showed a robust up move yesterday and moved past its 200-DMA by a notch and ended near the high point of the day. Today, some amount of subdued opening can be expected and the Markets are once again likely to consolidate around its 200-DMA, which is 7830 today. The overall structure of the Markets is bullish and the support zones of 7670-7720 have hold good with the upper resistance levels remaining at 200-DMA and further near 7970 levels. The overall upward momentum within this broad range is likely to remain in the immediate short term. 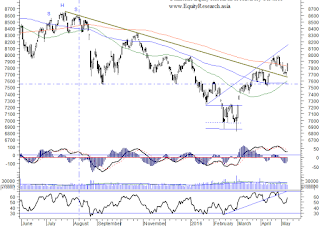 The RSI—Relative Strength Index on the Daily Chart is 58.0870 and it remains neutral as it shows no bullish or bearish divergence or any failure swings. The Daily MACD stays bearish as it still trades below its signal line.

On the derivative front, the NIFTY May futures have added over 6.09 lakh shares or 3.46% in Open Interest. The increase in Open Interest coming in with a up move clearly signifies addition of fresh long positions in the Markets.

Coming to pattern analysis, the Markets have established its existing range by first resisting multiple times near 7970 levels and then taking support for multiple time near its falling trend line pattern support  around 7680 levels drawn from 8600 levels. The NIFTY has been oscillating in this broad trading range for past many days. In the meantime, it has crisscrossed its 200-DMA and it is attempting to move past that level. So long as the Markets are able to move past and stay above its 200-DMA, which is 7830 today, it will remain and trade with upward bias. Having said this, the resistance around 7970 levels remain and the Markets are likely to face resistance in that zone. However, with a tepid start expected today, the Markets are likely to see some consolidation around the 200-DMA.