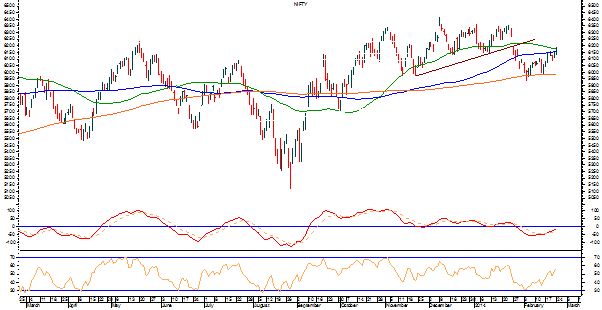 The Markets are expected to open on a modestly positive note and continue with its up move at least in the initial trade. The session would remain dominated today with the rollovers as we enter the penultimate day of the expiry. Tomorrow would be the expiry of the current month, as Thursday is a trading holiday. The Markets are likely to find resistance near their opening levels and we may see some capped volatility today.

For today, the levels of 6215 and 6250 are immediate resistance levels for the Markets. The supports would exit at 6150 levels and further down at 6125.

The RSI—Relative Strength Index on the Daily Chart is 56.0147 and it has reached its highest value in last 14-days which is bullish. It does not show any bullish or bearish divergence. The Daily MACD continues to remain bullish as it trades above its signal line.
On the derivative front rollovers continued as the NIFTY February futures shed over 15.94 lakh shares or 11.41% in Open Interest whereas the March futures added 20.73 lakh shares or 55.14% in the Open Interest.

All and all, with the session expected to remain dominated with expiry, it is likely to see a range session with some amount of volatility ingrained in it. However, it is best advised to avoid creating any short positions. Sectoral out performance would continue and it is advised to have very select and stock specific approach while protecting profits vigilantly at higher levels.