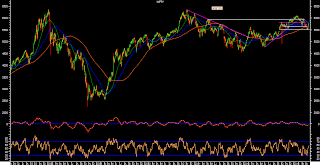 The lead indicators point towards  continuation of up move, at least in the initial trade. The RSI—Relative Strength Index on the Daily Charts is 57.8103 and it has reached its highest value in last 14-days which is bullish. It does not show any bullish or bearish divergence. The Daily MACD is bullish as it trades above its signal line.

On the derivative front, the NIFTY futures have continued to shed Open Interest by over 14-19 lakh shares or 7.47% indicating strong short covering. These short  covering has occurred as the Markets had added massive open interest on its way down.

Having said this, as mentioned earlier, the Markets have pulled back nearly 300-odd points and while doing so has shed open interest significantly. This clearly indicates that the pullback is on account of short covering and not on fresh buying. It requires to be very keenly observed to see if this short covering is replaced by fresh buying in order to sustain and continue with the current ongoing up move.

All and all, there are chances that the Markets can open on a moderately positive note but at the same time, there are equal chances that we may see some minor profit taking later today or in coming session. The possibility of the Markets consolidating or seeing some minor profit taking just cannot be ruled out given the technical and derivative data reading. Keeping this in view it is advised to approach the Markets with cautious outlook until some consolidation happens.